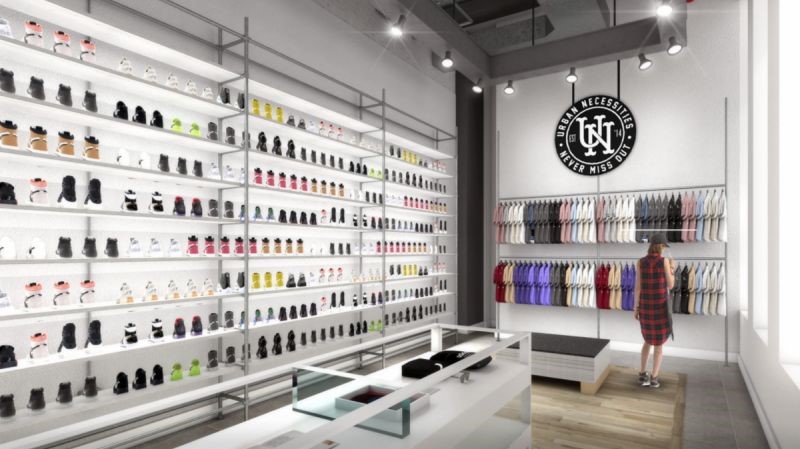 Starting Saturday, sneakerheads in New York will have a surprising new place to buy kicks and streetwear: an American Eagle Outfitters store in Manhattan’s SoHo neighborhood.

The teen retailer known for its jeans—and its growing Aerie lingerie brand, which has stolen share from Victoria’s Secret’s Pink label—has partnered with trendy Las Vegas sneaker consignment shop Urban Necessities for Urban’s first shop outside Sin City. The 1,900-square-foot in-store pop-up shop—carrying items that include Supreme streetwear and a pair of 2016 Nike self-lacing sneakers reselling for $50,000—will take up about a third of American Eagle’s first-floor space and stay open for a year, the first such long-term commitment for the retailer.

And it’s not just a lease partnership; American Eagle has taken a stake in Urban Necessities to help fund its growth, Chad Kessler, global brand president for the retailer’s flagship brand, said in an interview.

“Sneakers are about self-expression,” Kessler told me. “Our brand is built on individual style. We are about self-expression. We have the second-largest (U.S.) jeans business (after Walmart). Jeans and sneakers are great pairs. … Urban Necessities has a loyal following and is able to get the most exciting sneakers out there.” While one store likely won’t make any dent for a company with 1,000-plus locations, Kessler said he hopes to eventually open Urban Necessities inside some other American Eagle stores to “make sure it’s scalable.”

“My goal is for this to be an ongoing long-term partnership,” he said.

The partnership is another arrow in American Eagle’s quiver as it tries to win over today’s Gen Z shoppers. About a month ago, the company introduced its AE Style Drop rental service, which allows subscribers to rent three items at a time for $49.95 a month. Kessler said that the retailer has seen a “great response” and that the initial sign-ups have topped company expectations.

“There’s a new way customers are shopping,” he said. “It’s resale and rental. We are eager to try something with this new commerce.”

On the marketing front, as part of its #AEXME marketing campaign for this spring, American Eagle gave its cast of real Gen Z consumers total creative control in directing, styling and shooting selfies in real-life environments. And the company’s namesake brand, about 80% of its business, hasn’t retouched images of customers the past two years, Kessler said, taking a page from its sister brand Aerie, known for its successful #AerieReal campaign. Gen Z shoppers, which represent about half of American Eagle’s 15-to-25-year-old target customer base, “really want to put their money where their value is,” even more so than millennial consumers, Kessler said. “They celebrate diversity and inclusion. The brand is all about self-expression and individuality. We are trying to make youth empowerment.”

To meet that demand, the company has made its New York Union Square store a test lab for different ideas, including washers for students to do their laundry for free and a lounge area. Shoppers buying jeans can also have them customized for free, and a fitting room app allows them to interact with employees outside. While the company hasn’t found as much “engagement” with the free laundry feature and has no plans to expand it elsewhere, both the customization initiative and the fitting room app have been rolled out to some other stores, Kessler said.

Gen Z consumers “actually have a preference to shop at a physical location” compared with millennials, Kessler said. “They do even more research and pre-shopping on their device and online. The majority of Gen Z shoppers are looking for in-store experience. They want to interact with us.”

These and other efforts have paid dividends. American Eagle is second only to Nike among teenagers’ favorite clothing labels, according to a 2018 Piper Jaffray study, which surveyed 8,600 teens across 48 U.S. states, with an average age of 16.

Why is this crucial? Different studies have pointed to the rising importance of Gen Z, which Piper Jaffray said contributes about $830 billion to U.S. retail sales annually. American Eagle’s success has also made the company an outperformer in the fashion industry, which in recent days received the news that once-hot denim brand Diesel was filing for bankruptcy protection. Calvin Klein, meanwhile, said it had decided to shut its luxury collection business.

At a time when many clothing retailers like Victoria’s Secret and the Gap brand are using profit-eroding discounts to clear unsold merchandise, American Eagle late Wednesday reported comparable sales in the fiscal fourth quarter that ended February 2 rose 6%, its 16th straight increase. That included a 3% increase from its eponymous brand, which last year saw jeans sales top $1 billion for the first time to represent a third of the brand total, Kessler said, adding that its jeans business has gained market share. The smaller and fast-growing Aerie brand also continued to gain on Victoria’s Secret. Aerie comparable sales surged 23%, the 17th straight quarter of double-digit increases.

While profit has been partly dented by American Eagle’s increased spending on marketing, in-store payroll, wages and distribution expenses, the company actually lifted demand through more regular-priced sales as it offered fewer promotions and “lowered markdowns,” in sharp contrast to the deep discounts many of its mall rivals gave away during the holiday quarter.

Capitalizing on its U.S. momentum, the company is expanding internationally and recently announced a plan to open its first licensed store in Europe.

With studies showing Gen Z consumers worldwide being more similar in their behaviors and attitudes than other generations, American Eagle cracking the code on teens in the U.S. should make it easier for the company to replicate its success overseas.