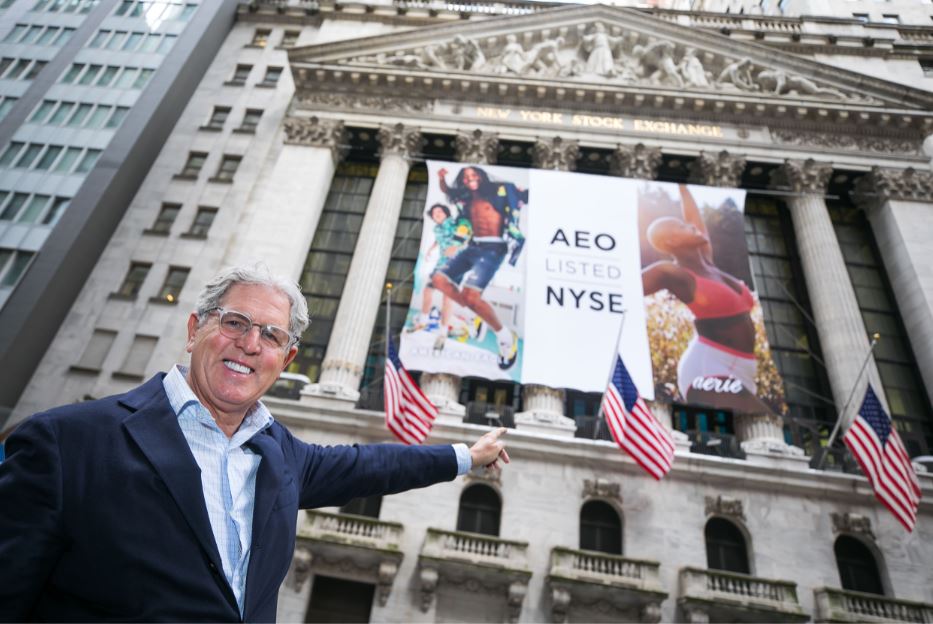 On Monday, American Eagle celebrated 25 years since its IPO by ringing the opening bell at the New York Stock Exchange. The company has been performing well over the past few years, particularly compared to some of its contemporaries, and its lingerie brand, Aerie, has been largely driving its growth.

“Across the lingerie market, everyone is shutting down stores, but Aerie is actually opening up a ton of new ones,” said Iskra Lawrence, a model who has worked closely with Aerie, starring in campaigns and also serving as a brand ambassador, making media appearances and also providing input on the brand’s messaging.

In the fourth quarter of last year, Aerie’s sales jumped by 23% year over year, while American Eagle, as a brand, grew by just 3%, a disparity many compared to the relationship between Gap and Old Navy. American Eagle’s CFO even admitted that a split similar to that of Gap and Old Navy could happen in the future.

While American Eagle is focused on reworking its existing stores by adding new components like a sneaker resale shop, Aerie has been focused on expanding its physical footprint. Last year, American Eagle said it planned to open between 50 and 80 new standalone Aerie stores in the U.S. by the end of 2019. Jennifer Foyle, the global brand president of Aerie, said she is also focused on continuing the brand’s growth through inclusive messaging and standout brick-and-mortar experiences.

“The messaging of inclusivity and sizing, it permeates through the walls,” Foyle said. “The fitting room is one of the best examples: There’s a curtain over the mirror when you come in. That tells you to feel good about yourself first and [decide] how you feel in the lingerie before you look at yourself.” She said there are also love notes in changing rooms featuring encouraging phrases. “Shoppers can add their own to remind others to love their body and feel good, and the messages get passed on,” she said.

Foyle said the company has implemented training programs at all levels of its stores, specifically focused on the same messaging featured across its marketing channels: an emphasis on personal empowerment over the ultra-sexy objectification of Victoria’s Secret-style lingerie marketing. None of Aerie’s models are retouched after they are photographed, and the company has featured women with various disabilities, in addition to women of all sizes.

Lawrence said all of Aerie’s messaging is meant to communicate that the lingerie is primarily meant for the wearer and not necessarily for the viewing pleasure of others, which has been the unspoken implication of lingerie brands for years. Of Victoria’s Secret, Foyle said only that she has much “respect for the competition.”

Aerie’s positioning puts it in line with a wave of underwear brands that have challenged Victoria’s Secret’s particular brand of marketing. Brands like ThirdLove and Les Girls Les Boys have helped swing women’s lingerie marketing away from sexy campaigns with impossibly beautiful women to something more relatable to the everyday consumer.

For Aerie’s future, Foyle said the brand is working on expanding significantly, but not too quickly. Aerie is currently only sold online and in brick-and-mortar locations in 17 states, but she plans to change that soon.

“Everyone keeps asking us to expand more and more, but we are not even across the country yet,” Foyle said. “Brick-and-mortar is important, but it’s especially so for lingerie. You absolutely need to have a strong online and offline presence for lingerie. Omnichannel — I hate that word — but you need to have it.”