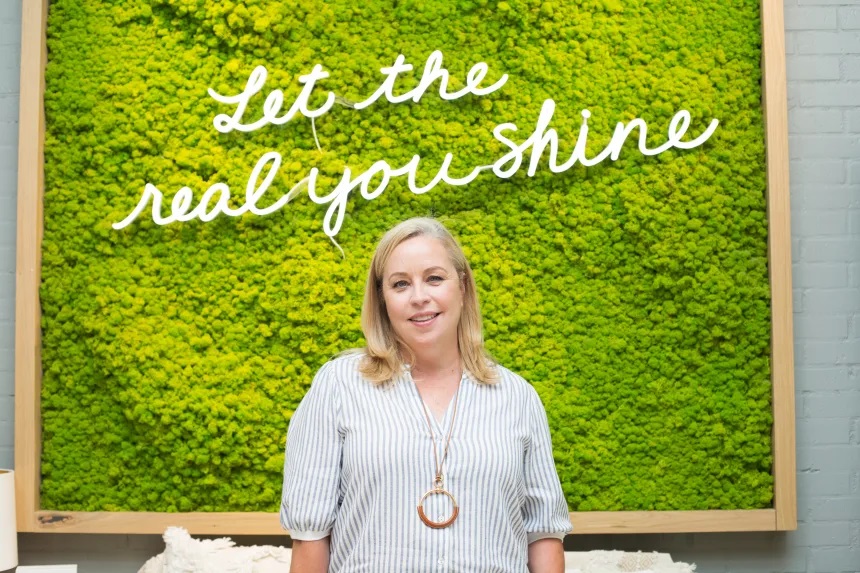 The company’s global brand president launched photoshop-free campaigns five years ago and created a movement in the process.

By Tyler McCall | Link to article

In January, Aerie threw an intimate dinner at a cozy New York City restaurant to celebrate its latest class of Role Models, something that it’s turned into an annual tradition. It was a big night for the lingerie brand, especially for Global Brand President Jennifer Foyle, who first took Aerie’s campaigns photoshop-free five years ago. But she missed a large chunk of it — the photocall with stars like Jameela Jamil and Aly Raisman, the cocktails with members of the fashion press — slipping in just at the start of dinner. When she gave a brief speech welcoming her guests, she shared that she had a good reason for being late: Her teenage daughter had come home from school that day having a crisis about body image, the very reason for that fancy dinner and the subject that has motivated Foyle since 2014.

“I have a 12-year-old — she was younger back then, but even back then, she would look in the mirror and said to me, ‘Mom, am I beautiful?’ and I thought, ‘What are we doing to women today?’” Foyle explains over a breakfast later in the summer. “We are not sex symbols; we are real human beings. I just knew that was perfect timing, and it really was.”

Foyle had been at Aerie since 2010 and was drawn to the opportunity that the nascent intimate apparel side of the business presented to her. She saw a chance to reach a different customer than the more established, sexed-up lingerie brands had been courting previously, so she says she hit the reset button at Aerie, tweaking the platform and firming up the creative and marketing teams. Still, though, something felt like it was missing. It wasn’t until her then-head of creative asked about an as-yet un-photoshopped shot of a model on set that it clicked.

“I think my first reaction was that I started to laugh; I’m like, ‘This is ridiculous. They are professional models for a living and we’re airbrushing them,’” Foyle says. “Why would anyone even think about doing that? It had never occurred to me.”

#AerieReal was officially born with an unretouched ad campaign that went live in April 2014. If Foyle thought it would take some time for the public to adjust to Aerie’s bold move, she was mistaken. Not only did the campaign garner impressive amounts of press, but within a year, Aerie was single-handedly rescuing once-flagging American Eagle sales. Customers, it seemed, had been waiting for a brand like this for a long time.

Things only took off from there. Quickly off the heels of the #AerieReal launch, Foyle’s team realized they needed a brand spokesperson. Enter Iskra Lawrence, who signed on as the very first Aerie Real Role Model. “It was perfection with her,” Foyle says. “We struck such a chord with her — I mean, she went through so many struggles herself. She couldn’t get a job in the modeling industry because she was five pounds overweight or she was too thin.”

When Aerie signed with Lawrence, she had fewer than 100,000 Instagram followers; today, she’s a bona-fide superstar with 4.5 million., but she’s still as committed to Aerie as she was when she first started working with the brand. “She’ll go by a store if she’s off duty and be like, ‘I’m here,’” Foyle explains. “She really means business, and that’s who we look for. We don’t want just a pretty girl — that’s not what we’re doing here. We’re looking for somebody who believes in our mission.”

Aerie has continued to add women who are excited by its ethos; Jamil and Raisman have both served as Aerie Real Role Models, as have actresses Yara Shahidi and Samira Wiley, poet Cleo Wade, songwriter Rachel Platten, gold medal Paralympian snowboarder Brenna Huckaby and creator Molly Burke. Each one has brought a different perspective to the table, and still, Foyle knows there’s even more ground to cover, more people to reach, more issues to address. Aerie also began to cast real customers in shoots for the website, women who had colostomy bags, body hair, insulin pumps, wheelchairs  — women, in other words, who represented the broad spectrum of people shopping at Aerie.

The brand is doing work behind the scenes, too. The team responds to customers on social media, reaching out to them personally for feedback. They redesigned every single bra frame and extended sizing to cover up to a 42 DDD and a size XXL. (Foyle acknowledges there is more work to be done there and promises they are working hard at improving it even further.) They’re talking about the possibilities of adaptive clothing. There are always ways, according to Foyle, that the Aerie team can challenge themselves, a part of the job she finds most satisfying.

“It took time. It’s not like I came in and got rid of people; I came in and developed people,” Foyle says, choking up. “It is about, as a leader, listening to people and seeing what their needs are, not just giving up on a team. To me, it was like building a family almost, and that has been something that I’ll never forget in Aerie. It gets me emotional because it’s been a work of love, this team.”

Her hard work has paid off internally. When we visit the Aerie store in Soho to get in a quick photo shoot with Foyle before the store opens, the employees are excited to have her there. They’re just as passionate about the product and the messaging as she is. “It’s not just about putting marketing out there, it’s about believing it, and that’s what I think we do really well,” she explains. “There’s not a day without tears, some happy, some emotional, but we all really feel it and believe it.”

It’s paying off externally as well. Aerie’s sales are still rising, there are plans to grow its store base by 65 doors and it’s regularly name-checked as serious competition to the struggling lingerie giant Victoria’s Secret. Foyle notes that there are now plenty of up-and-coming brands that are following the Aerie playbook, something she says makes it stronger as a brand.

At the end of the day, though, much of Foyle’s mission comes back home. She gets emotional recounting a story about the time the mothers of two other girls in her daughter’s class reached out because their daughters were struggling with body image. Despite the fact that there was what Foyle calls “friction” between her daughter and her classmates, she invited the two and their mothers to accompany Foyle and her daughter to an in-store event where Aerie Real Role Models Huckaby and Wiley were set to speak. Hearing from them, and listening to the two be honest about their struggles, opened up an avenue for the young women to find a path to self-confidence.

“I’m not saying that it happens overnight, but we had dinner afterwards, and the girls were laughing,” Foyle recalls, tearing up. “One of the mothers called me and said, ‘This was game changing for my little girl.’ It’s powerful stuff; I have seen my little girl growing up, and I want her to have that ability to reach out to me or to reach out to people and just share their fears.”

Through her journey taking Aerie photoshop-free, Foyle has done more than just shake up the lingerie industry; she’s made her kindness available to the world. And that definitely counts.