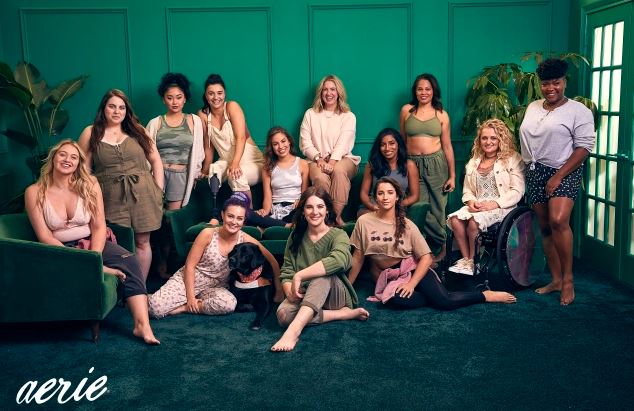 The AerieReal role models are back.

But this time a few new faces are donning the intimates brand. The list includes a scientist, a musician, an entrepreneur, a stage performer, two expectant moms and a handful of up-and-coming actresses.

“We don’t want to just represent models,” Jennifer Foyle, global brand president of Aerie told WWD. “First and foremost, the role models have to love our brand. We want spokeswomen and models who want to join us because they believe in what we represent and what we stand for, which is AerieReal.”

“We always want to build the cast around what the community represents to us,” said Stacey McCormick, senior vice president of Aerie marketing. “Every day we’re seeing different women who are doing amazing things. So we select women who are inspiring us. The list of things that we can do with these women is incredible.”

Aerie, which is owned by American Eagle Outfitters, started in 2006. Eight years later, the brand launched the AerieReal campaign. At the time, Lawrence was the sole role model, posing in photos sans airbrushing. While diversity and inclusion may be the new norm, back then Aerie was one of the first innerwear brands to feature so-called “real women” modeling the products — complete with all their flaws, like stretch marks and cellulite.

“Aerie plays with [diversity] in a way that is truly original and almost seemed dangerous when they started to do it,” Nef said. “There was no guarantee that selling something other than that idealized woman would sell. People didn’t want to see that [in 2014].”

But as the brand keeps growing, a number of other brands have mimicked Aerie’s marketing strategy, incorporating a diverse array of models. Not only that, what began as a grassroots effort, now has hundreds of women reaching out to be part of the campaign each year.

“Which is very flattering,” Foyle said. “It’s amazing how this brand has grown. It shows that this is more than just selling clothes. They want to be part of the community.”

Aly Raisman, center, is one of the returning AerieReal role models.

“I absolutely love Aerie,” Condor said. “Everything is so freakin’ comfortable. It’s just like wearing a hug.”

The AerieReal campaign also aligns with the Asian-American’s own personal mantra of promoting positivity.

“The world can sometimes be scary,” Condor said. “Sometimes in casting rooms, when it’s me and everyone else is blonde and blue-eyed, that never feels good. Because it kind of makes you feel like you’re filling a quota. So to have a campaign like this, that is so allowing you to be yourself, is really, really refreshing.”

Nef also wears the brand on the regular. (She was wearing an Aerie bra while chatting with WWD on the phone.)

“I kind of live in it,” Nef said. “It felt like a no-brainer when Aerie contacted me. When I learned more about its m.o. as a brand and its stance on transparency and truth in advertising, that only drew me in further.

“Something that Aerie doesn’t do with its partnership is assemble this tokenizing, go down the line, every minor group, let’s have them talk about that experience,” Nef continued. “It’s been this kind of cynical diversity, pandering, that I’ve encountered [with other brands] working in this industry.”

As the campaign keeps evolving, so do shoppers’ interests. McCormick said they want to hear career advice and tips on sustainability, for instance.

“That’s what’s driving that customer retention and keeping them coming back,” she said. “They want to learn from us.”

The spring 2020 AerieReal campaign also includes the first AerieReal summit, scheduled for March 8, International Women’s Day, in New York City. The day-long event will include appearances by role models and workshops on various topics. It also kicks off the brand’s summit tour, which will travel to roughly six other cities. The exact dates and locations have yet to be determined, McCormick said.

In addition, Aerie is awarding 20 shoppers who are leading change in their community a $20,000 scholarship to continue their missions. The winners will be announced in the fall.

“We’re excited to see the evolution of the year and how the platform unfolds,” Foyle said. “The role models are changemakers for sure. And they’re amazing. They really are. It was fun to get to know them.”