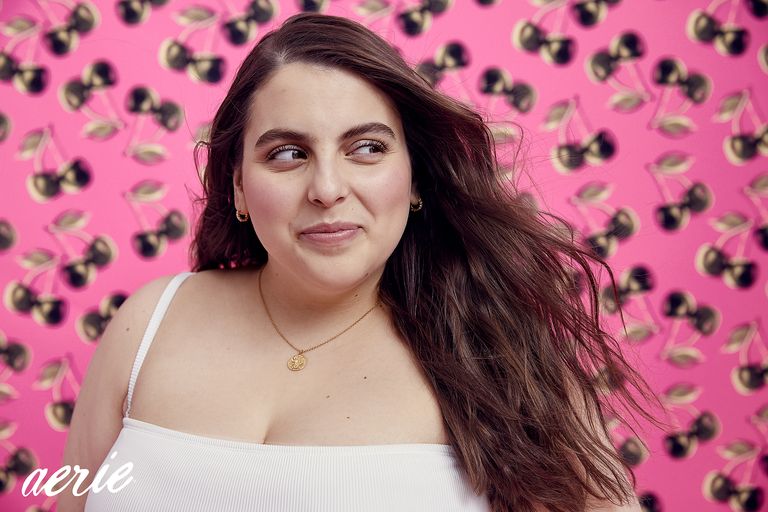 The Lady Bird and Booksmart star is one of the new faces of Aerie’s change-making initiative.

By Erica Gonzales | Link to article

During an awards season criticized for focusing too much on white men’s stories and their male directors, a rising star like Beanie Feldstein gives us hope. Her two breakout roles—the ambitious feminist and valedictorian Molly Davidson in Olivia Wilde’s Booksmart, and the dependable best friend Julie Steffans in Greta Gerwig’s Lady Bird—have revolved around young women’s lives and friendships, and were written and directed by women.

For her newest, non-film-related endeavor, Feldstein has gravitated toward a project in a similar vein: being an #AerieREAL Role Model. In the role, she’ll represent the lingerie line known for being inclusive, size-positive, and un-Photoshopped as she appears in official imagery and promotes philanthropy, leadership, and advocacy projects in the spirit of the brand. Feldstein joins the likes of actress and singer Ali Stroker, gymnast Aly Raisman, and actress Lana Condor as the newest faces of the campaign. Launching today is also the #AerieREAL Change Initiative, in which $400,000 in grants will be awarded to 20 individuals working to make a change in their communities.

“Everything that I try to do when I choose projects is choosing stories that are centered around very complex, brilliant, smart, energetic, unapologetic women,” Feldstein tells BAZAAR.com of both the Aerie opportunity and her female-focused films. “And I think just celebrating voices and bringing more representation to the table of women that have not had the opportunity to share their voice or share their story is what I’m always focused on and always excited to be a part of.”

The 26-year-old’s upcoming projects prove that her commitment to telling women’s stories is real. This spring, her festival flick, How to Build a Girl, is set to release in the United States. Based on Caitlin Moran’s novel (and life), the story revolves around a working-class girl finding her way through the music industry. She’s also set to star as Monica Lewinksy in Ryan Murphy’s retelling of the Clinton scandal in the forthcoming series American Crime Story: Impeachment.

Here, Feldstein talks to BAZAAR.com about the importance of her Aerie campaign and portraying young women on-screen.

How did the opportunity arise for you, and what did you like so much about it that you wanted to join in?

It’s so funny, because I feel like I took notice of the campaign, maybe, two years ago, and I was really like, that’s such a beautiful group of women. I live in New York and they have a huge [billboard] in SoHo, at their store and it’s American Eagle, so they always have big advertising, and it always caught my eye. And then I learned that they didn’t retouch, and I was like, “That is so dope and so important,” and then I magically got this email inbox a couple months ago, and I was like, “That feels like such a great fit between what I am and what I love to do and what I want to put out into the world, and a brand that has already been doing that for a long time.”

So I was just really elated, and I’m such a huge fan of all the other girls, when I found out everyone that was included, I was astonished, and it was just a very easy yes on my end.

I wanted to congratulate you, belatedly, for your Golden Globes nomination, and I’m sorry that you didn’t get it.

Oh, I was rooting for Awkwafina too.

How did it feel to get that kind of recognition for Booksmart?

It’s kind of beyond my wildest dreams. I really do feel like that nomination is really in a lineage of leading actresses in a comedy or musical that I think back to Emma Stone in Easy A or a Hailee Steinfeld in Edge of Seventeen, and I think the Globes always carves out a really beautiful spot to celebrate a movie like Booksmart. And I just felt really honored to be in that lineage, and to be nominated in that category with those extraordinary legends was really [cool].

Did Molly from Booksmart reflect your high school experience in any way?

I loved Molly Davidson. I think she kind of is the ultimate representation of the girl that loves to do her homework and is incredibly dedicated to her studies and how funny and energetic and silly and loving those girls can be, so I wasn’t necessarily that girl in high school, I was more of, like, Noah Galvin’s character, George, the theater kid, but I love that character. And I had so many young women come up to me, and young girls say, “I’m that girl and thank you for celebrating homework and friendship!” and I was like, “You’re so welcome!”

It’s really special to be a part of projects that really speak to young women, and I think that’s why I was excited about Aerie, is that it’s such a champion of women of any age, but it also just really celebrates a woman for who she is and that’s kind of all I want to do, always.

One thing I really liked, both with your performance in Booksmart and in Lady Bird, was the portrayal of very real and relatable young, female friendships. It was very refreshing and made me feel seen. What did it mean to you to be able to bring that kind of story to life in both of those movies?

I think my friendships have always been my North Star and guided me through life in a very special way, particularly my female best friends when I was younger and still now. And like you said, I felt very seen, reading it, and then to be part of something like that so early in my working life, it really set the bar very high. And so I try to find, now, projects that inspire me as much as that script did, and I waited for something that really clicked and Booksmart just felt like the perfect pairing to that film.

And Olivia [Wilde] is so brilliant and Katelyn [Devers] is so brilliant. After working in films and in television with these extraordinary women, if I was going to be a part of a campaign of sorts, I wanted to do something very similar in that sector. I walked on the set for Aerie and I was like, “Ali Raisman! And Ali Stroker! And all these women that I just love and am such huge fans of.” So it felt very special and it was definitely the most inclusive group of women I’ve ever kind of stood with, and that was a really, really, beautiful experience.

How did you feel seeing women directors get pushed out of the Oscar nominations this year?

There’s so much amazing talent to choose from that it was definitely heartbreaking to not see any women in there. There’s so many amazing films directed by women this year, and it’s very sad that they didn’t get the recognition that they deserved.

What’s really lucky and uplifting about you is that you’ve worked with a lot of female directors or screenwriters so far.

Lady Bird was so perfect. You want it to live up, and I was so lucky to have such a kind of perfect, magical experience so early in my working life that I really want to emulate. So to get to work with young, inspiring women like Greta and Olivia, it’s irresistible, and it’s also very important to celebrate women’s voices. And I think that’s what we’re trying to do with this campaign, but also what I’m trying to do in my working life, just give women the kind of space and spotlight that they deserve.

This interview has been edited and condensed for clarity.