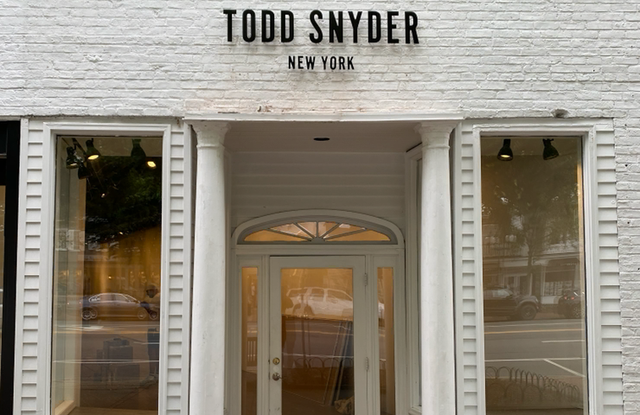 New York City is quiet in the summer, even without a pandemic, as residents escape the concrete jungle for the cooler climes at beaches and mountains.

So Todd Snyder is following the crowd and will open his first pop-up in East Hampton next week.

The 1,000-square-foot space at 50 Main Street will be located between Warby Parker and Dylan’s Candy Bar in the tiny vacation community. It is slated to open on Monday and continue through the end of the year. If it’s successful, Snyder said, it may become permanent.

“I’ve always had my eye on East Hampton since moving to New York 30-some years ago,” he said. Ralph Lauren’s shop in East Hampton, which Snyder called a “miniature version of his lifestyle,” was a particular incentive for him. “Even in normal times, the city slows down so we thought this was a good time to test the market.”

To decorate the pop-up, he said he’ll borrow a lot of the furniture and artifacts from the company’s New York City showroom, which remains closed, as well as its two stores. “Our Madison [Park] store opened last Thursday and the Liquor Store [on West Broadway] will open next week,” he said. “Because of the pandemic, we’re making things less dense to allow people to walk around, so we can repurpose the furniture. It worked out really well.”

Snyder said that since COVID-19 hit, his online business has been “really strong” and is serving to keep him connected to both his existing customers while becoming a way to attract new ones. Snyder believes the pop-up will serve the same purpose.

“We look at the Liquor Store as a ‘discovery shop,’” he said of his location in Tribeca in a former liquor store that had previously housed a J. Crew men’s store. “They can discover who we are and what we do. It’s an acquisition tool, like our catalogue. A lot of our customers have relocated to the Hamptons so we can serve them there and hopefully acquire more.”

The pop-up will carry an assortment that will be heavily skewed toward the company’s beach-related collection — about 75 percent will be swimwear, linen shirts, shorts and some casual sport coats, Snyder said. It will also include collaboration product from Champion, Hartford Swim, Moscot, Miansai and others.

“Then like we do at the Liquor Store, we’ll have items from our online collection that people can order and then have shipped. It cuts down on inventory and is a really good way for our customers to shop,” he said.

“Customer acquisition is our number-one goal along with driving people to our online business, which has been our saving grace. That’s why we’re looking at pop-ups so see if they work and we can convert people.”

Snyder’s business was purchased by American Eagle Outfitters for $11 million in 2015.