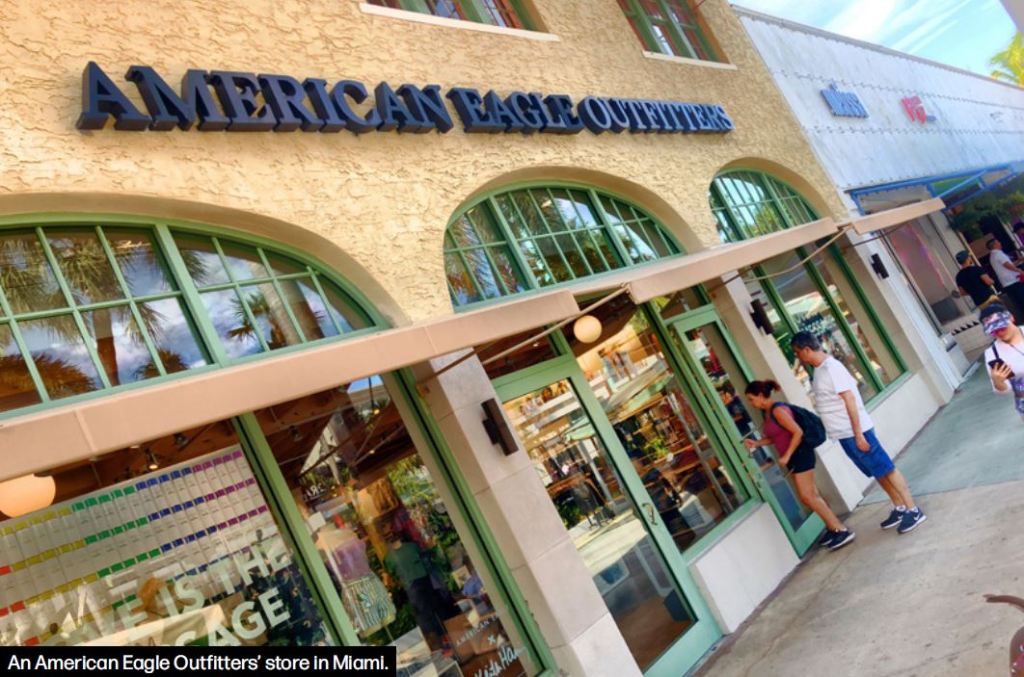 Ceo Jay Schottenstein reflects on fashion, the future of retail and plans for Aerie’s Jennifer Foyle to work with the AE brand.

The company, parent to the American Eagle, Aerie, Todd Synder and Unsubscribed brands, posted quarterly results Wednesday before the bell, falling short on both top and bottom lines, but still beating analyst expectations for the three-month period ending Aug. 1.

Total company revenues fell 15 percent to $884 million, down from more than $1 billion the year before. The retailer said the declines were largely a result of store closures during the quarters. Revenues in the year-ago period also included $40 million from Japanese license royalties.

Still, the company lost $13.7 million during the quarter, compared with profits of nearly $65 million the same time last year. That’s on top of the company’s $257 million loss the quarter before that.

“In the midst of an unprecedented crisis, we delivered a significant improvement from the first quarter throughout our business — a true testament to the agility, talent and commitment of our team,” Jay Schottenstein, executive chairman of the board and chief executive officer of American Eagle Outfitters, said in a statement. “Aerie was simply outstanding, fueled by strong demand, with revenue rising 32 percent and record margins, demonstrating the power of the brand and signaling the vast opportunity ahead. Across brands, digital sales accelerated and we successfully reopened stores during the quarter.”

The retailer closed all of its stores mid-March to prevent the spread of the coronavirus. Stores did not begin reopening until May. As of Wednesday, the company said approximately 90 percent of stores have reopened.

But even amid the pandemic, American Eagle Outfitters has been in expansion mode. The retailer launched e-commerce businesses across Asia, including Japan, Hong Kong, Australia, Malaysia, Taiwan and Singapore, in addition to a shopping site in Mexico during the quarter.

“We will continue to focus on expansion in important international markets where we see significant opportunity for growth,” Michael Rempell, chief operating officer of American Eagle Outfitters, said on Wednesday morning’s conference call with analysts.

In late June, American Eagle Outfitters launched its fourth brand, a single-store retail concept located in East Hampton, N.Y., called Unsubscribed. The store, which focuses on slow retail, is the brainchild of Aerie global brand president Jennifer Foyle. Then in July, Foyle’s team launched Offline by Aerie, the intimates apparel brand’s take on activewear and an attempt to tap into the growing performance wear and ath-leisure markets.

In fact, the success of Aerie partially explains Foyle’s recent promotion to the expanded title of chief creative officer of American Eagle.

“We had a five-year plan to get [Aerie] to a billion dollars and we’re pretty much on that plan to get there by the end of the year,” Foyle said on the call. “So amidst this pandemic and all of the crisis that we’ve seen out there, the teams rolled up their sleeves and drove a strategy that we positioned five years ago. Obviously, the product assortment in Aerie, as you know, is actually adjacent to what’s going on out there.

“There’s more acceleration to be had based on the demand from customers, even in some of the categories that one would not expect,” Foyle continued. “Swimwear had an exceptional run in Q2. Who would have thought? I don’t know who’s wearing bikinis on Zoom meetings, but somebody is because we regained that share and I’m certainly excited with that business.

“This portfolio, with AE rooted in denim and Aerie rooted in intimates and Offline rooted in leggings, we have a sizable opportunity to gain market share,” Foyle told WWD. “There’s so much talk about soft dressing and as you know, Aerie really dominates in that category. Our biggest opportunity in AE is to really bring back the market in tops and go after tops.”

“We’re not walking away from a lot of great short-term opportunities in soft dressing, comfortable dressing, but it is nice to see success in our jeans business,” Kessler said on the call.

Meanwhile, the company continues to evaluate its retail fleet with plans to close between 40 and 50 stores Stateside this year while continuing to grow the digital business.

“We always close around 40 stores a year, so this is nothing new; this is normal,” Schottenstein told WWD. “What we’re doing now, we’re looking to see how to optimize our opportunities. We think, if anything, with what’s going on in the retail industry, with all the consolidations and all the bankruptcies and all the closing, we think in the long run there will be great expansion, whether it be mall based, whether it be regional centers, whether it be street locations in certain neighborhoods, college campuses. It’s going to be a great opportunity to get our message out there and get our stores out there. And there may be different ways of doing different types of stores. So, we’re looking at all the alternatives out there for us and we’re looking at all the opportunities.”

One of those opportunities will be opening two new standalone Offline by Aerie stores this fall — one in Nashville, Tenn., and one in New Jersey — with the possibility of additional locations in the future.

“Brick-and-mortar is not going anywhere,” Schottenstein said. “People are social animals. People like to go out. People like to shop. And that’s not going away. What it will come down to will be the experiences that we give the customer in the future. Right now, the experience you have to give them is security and safety. People want to feel they’re shopping in a very safe environment. But as time goes on…and we beat this COVID-19 crisis and people get more comfortable, people will shop, whether they shop in a mall, they shop at street locations, it’s going to be the experiences you give them when they come.

Mike Mathias, chief financial officer of American Eagle Outfitters, added on the call that the retailer has nearly 250 store leases set to expire this year, with about the same amount set to expire in 2021. In addition, the average lease term is less than three-and-a-half years. “Flexible lease portfolios will allow us to quickly exit locations that no longer make sense,” Mathias said.

Total inventory costs fell 21 percent to $421 million during the most recent quarter. American Eagle Outfitters ended the quarter with $899 million in cash and equivalents and nearly $517 million in long-term debt.

“Aerie was the clear brand standout… indicating that the growth is clearly being well managed,” Kate Fitzsimons, an analyst at RBC Capital Markets, wrote in a note. “Bottom line, we see [second-quarter] results as indicative that the AEO team is navigating COVID-19 headwinds well.”

Shares of American Eagle Outfitters, which closed up 1.63 percent to $13.41 a piece on Wednesday, are down 22.5 percent year-over-year.

The company is not offering forward-looking guidance, but anticipates a return of fashion mixed with comfort post-COVID-19.

“I think we’re going to have the Roaring Twenties again,” Schottenstein told WWD. “If you look at the history, the [Spanish flu] pandemic took place in 1918, 1919. And after that they had the Roaring Twenties. And I think part of the reason for the Roaring Twenties is people went through those two years of hell where they were separated in their community. And then things went back [to more normal] and it exploded. People went out and enjoyed themselves. There were several years of real enjoyment there. I think what will happen [in the future] is, people will go out and people will want to get dressed up again.”