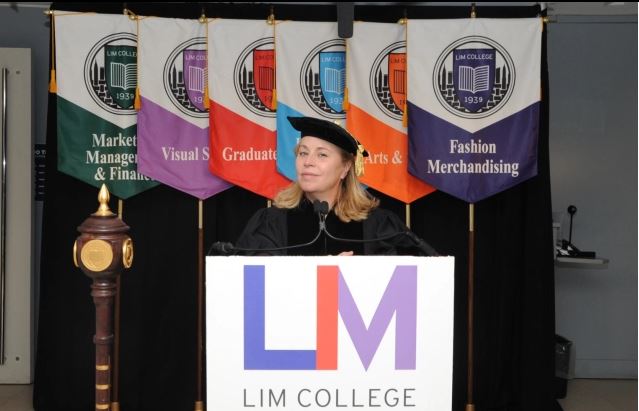 By WWD Staff | Link to article

After a COVID-19 postponement at Lincoln Center, LIM College held its class of 2020 commencement ceremony virtually and streamed globally, on Thursday. This was the first virtual event for the 81-year-old college.

Elizabeth S. Marcuse, LIM College president, told graduates that it is a particularly “critical time to be entering the business of fashion. Our industry and its associated fields are in rapid flux. Fortunately, the education you received at LIM has prepared you to rise to this occasion.”

Marcuse said their education wasn’t “just about being able to memorize facts in a textbook and reel them back off on an exam. Your education was about learning to be creative, adaptive and responsive as the world around you grows, evolves, and does the unpredictable on a daily basis.”

Foyle’s address included talking about her late mother, Pauline McInnis Foyle, whom she described as “a true trailblazer, who began her retail career at the very bottom — using her feet instead of a desk. She worked her way up to the boardroom, where men had most of the seats at the table.”

Foyle then recalled one of their last conversations with her mother. “I asked her what she thought about life,” Foyle said. “Without hesitation, she said, ‘Well, Jenny, it’s available.’ Those words guide me. Every time there’s an obstacle, personal or professional, I think of that special night. Life is available. It’s here to be seized, no matter how daunting the problem or how big the battle.”

Foyle then assured graduates that the global pandemic “presents real roadblocks” but promised that “your grit, imagination and feistiness will get you to the other side. Once there, you will be stronger and more agile than the generations that came before you.”

Von Furstenberg noted that the class of 2020 was graduating during a time of drastic societal change, but said “your business life will be a journey, and like all journeys, the landscape will change…but you will always be yourself.”

There were 544 graduates this year from all over the world with 219 receiving master’s degrees, 311 earning bachelor’s degrees, and 14 getting associate degrees. Paige Secosky, from Monroeville, Pa., was the undergraduate class valedictorian. “Paige started an immensely popular YouTube channel before entering LIM and then used her business education to grow it to over 500,000 followers,” the college said. “Her long-term goal is to create digital content that educates people on ways to make the fashion industry more sustainable and environmentally responsible.”

A recording of the streamed video can be found here: limcollege.edu/commencement.