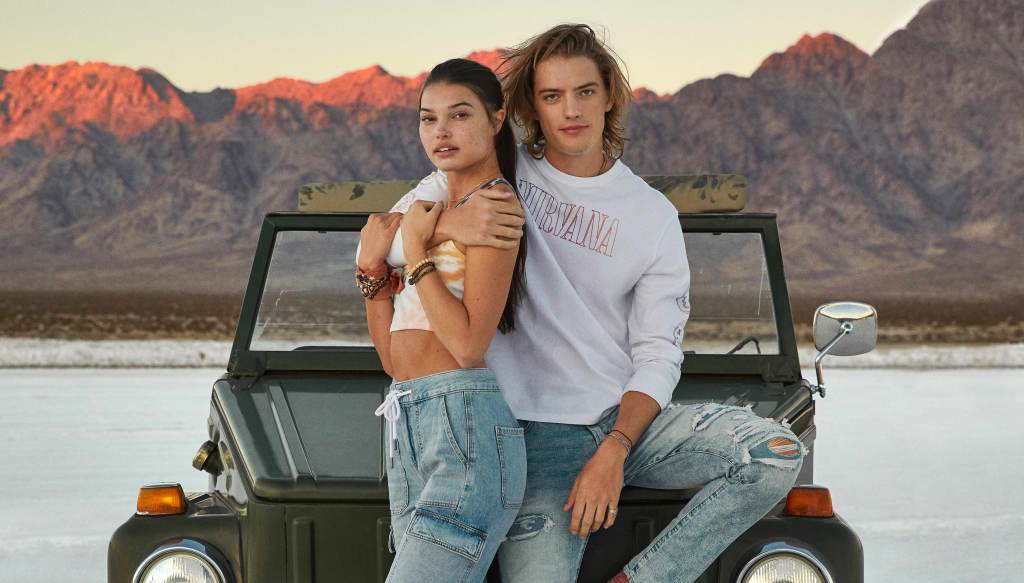 By Madeline Stone | Link to article

• American Eagle Outfitters has fared relatively well during the pandemic.

• Aerie has fueled a lot of the success with its comfortable clothes and positive brand message.

• The company has made some key changes to its supply chain, too, and it’s evaluating its store fleet.

As the COVID-19 pandemic has upended the retail industry and sent more shoppers online, American Eagle Outfitters has leaned into its social media savvy and strong brand messaging, accelerated its plans to speed up its supply chain, and reevaluated its store base.

It has also managed to grow revenue for Aerie, its intimates, and activewear brand, in the last two quarters despite the impact of the pandemic.

The teen-centric clothing company said during a presentation at its investor meeting on January 21 that it expects total fourth-quarter revenue to be down in the low single digits compared to the same quarter last year. In the third quarter of 2020, which ended October 31, net revenue decreased 3% to $1.03 billion.

Normally a decrease in revenue, even a small one, is not something to celebrate. But these are not normal times — the global fashion industry saw an estimated 30% decline in revenue year-over-year in 2020, according to a McKinsey report written in partnership with the publication Business of Fashion.

Meanwhile, Aerie’s revenue is expected to be up in the high 20% range for the fourth quarter. That level of growth is exceedingly rare in a sector that has been battered by store closures and guest capacity limits during the pandemic. Even in the first quarter of 2020, during which the brand’s stores were largely closed due to the pandemic, Aerie’s revenue decreased only 2%.

$2 billion brand. Aerie has been a large part of American Eagle Outfitters’ recent success. It has a strong brand based in a message of self-empowerment that resonates with young consumers.

But both of American Eagle Outfitters’ brands happen to focus on clothing that is casual and comfortable, which as a category has done less poorly than other parts of the apparel sector during the pandemic. According to data from The NPD Group, total apparel sales fell about 19% in 2020, but sales of sweatpants grew 17%, sleepwear grew 6%, and sports bras grew 10%.

The company has jumpstarted its digital capabilities as well. American Eagle Outfitters’ e-commerce business grew to almost $1.7 billion in sales in 2020 and the company made adjustments to its supply chain and distribution strategies that have allowed it to be more efficient with its inventory and rely less on promotions.

Social media prowess and a brand that resonates with teens

While Aerie’s skyrocketing growth has been a leading topic in conversations about American Eagle Outfitters for a while, the company’s namesake brand still has a lot of cachet on its own, analysts say.

Sole said the firm’s research has indicated that American Eagle has strong global potential as well. Founded with a focus on denim in 1977, the company now has more than 1,000 stores in the US, Canada, Mexico, China, and Hong Kong.

Company executives said during the investor presentation that American Eagle is currently a $3 billion brand.

Authenticity is a key component of the brand identity for both American Eagle and Aerie.

In 2014, Aerie famously stopped the practice of using Photoshop on images of models and advanced body positivity as part of its brand. The company later similarly abandoned Photoshopping for American Eagle, emphasizing individuality and self- expression in its messaging.

The company has also embraced social media platforms like TikTok. In April 2020, it launched a campaign called the #AeriePositivityChallenge, which included sponsored posts from body-positive influencers like Charli D’Amelio, Denise Mercedes, and Iskra Lawrence.

In November, Hannah Schlenker, a TikTok user with more than 830,000 followers, posted a video of herself wearing Aerie’s “Offline Real Me High Waisted Crossover Leggings.” The post quickly went viral, leading the leggings to repeatedly sell out. Aerie then partnered with Schlenker on a sponsored post in December, featuring her modeling a different set of products.

In July, American Eagle launched a back-to-school campaign that was shot entirely over Zoom and meant to mimic the style of a typical TikTok video.

“They have really used real people to advertise and showcase the product, and that resonates with a lot of younger consumers,” Neil Saunders, managing director at GlobalData Retail, told Insider.

As part of its response to the pandemic, American Eagle Outfitters also accelerated a supply chain transformation that it had developed in 2019 and planned to roll out over several years. Instead, many of the core tenets of the plan were in place by the beginning of the fourth quarter of 2020, Michael Rempell, American Eagle Outfitters’ executive vice president and chief operating officer, told Insider in a recent interview.

The company set up “distribution nodes” in areas close to large population centers in Los Angeles, Chicago, Boston, and Jacksonville. These centers are smaller than the company’s existing distribution centers in Ottawa, Kansas, and Hazleton, Pennsylvania.

Rempell compared the new strategy to Amazon’s network of fulfillment centers, which enables it to ship out goods to customers quickly.

“That’s the concept that many retailers use for hard goods, or goods that have a longer life cycle and are more predictable, but very few, if any, have been able to prove that concept with fashion,” Rempell said. “We set out to prove that same kind of distribution capability and philosophy with a company that has stores as well as e-commerce.”

Rempell said the company additionally set up new data analytics teams to make decisions about where in its network inventory would be best placed to meet demand.

He said the changes have allowed the company to reduce costs by more efficiently consolidating shipments and by shipping goods from centers closer to where customers live. It has also been able to increase its overall delivery capacity so that it is not too reliant on any particular area and thus vulnerable to disruptions.

Being more efficient with inventory has also helped the company to rely less on promotions.

“When they can do that, they’re much better at predicting what consumers want, and they’re much more likely to sell goods at full price.”

Being able to avoid discounting contributes to overall profitability, he added.

Looking towards the future

American Eagle Outfitters’ thinking around its store base has also been evolving.

The company closed 52 American Eagle stores in 2020, and it plans to close between 200 and 250 more in the coming years. Most of those closures will be mall locations, the company said during its investor event.

As of the third quarter of 2020, 302 of American Eagle’s 880 stores in the US and Canada were in “B” malls, while 140 were in “C” malls. Malls are typically graded on the dollar amount of sales their tenants generate per square foot, with “A” being the best grade a mall can get and “C” being the worst.

“There’s really no doubt that some of the malls that American Eagle is in are not going to come back very strongly, and I think that they probably need to address that at some point,” Saunders, of GlobalData Retail, said.

Another challenge for American Eagle is that its focus has long been on denim, a category that has not seen as much sales growth during the pandemic as athleisure and comfort categories have. Company executives said during their presentation in January that the American Eagle brand’s margins have not been as strong in recent years as they should have been.

But, they emphasized, the company wants to lean into its heritage as an authority in denim as consumers’ needs change going forward.

“Styles are going to change, and they are changing, as you’re seeing baggier shapes” of jeans now, Saunders said.

While American Eagle sells a lot of skinny jeans and jeggings, it also has some wider-leg styles like its skater and boyfriend jeans.

If American Eagle can continue to adapt to consumers’ changing style preferences, it has an opportunity to provide the products they want to fill their closets with.

At the same time, the company plans to build on Aerie’s strength and open more stores dedicated to that brand in the near future.

It said during its investor day presentation that it hopes to have 550 Aerie stores by 2023, up from 342 today. About 50 of those stores are slated to open in 2021. These store counts include standalone and side-by-side stores, as well as stores for Aerie’s new sub-brand, Offline.

But, it expects for Aerie to continue to be a digital-first brand. The company said during its presentation that it wants to grow Aerie’s digital penetration, or the percentage of customers who shop on the company’s website or app, from 43% today to more than 50% in 2023.