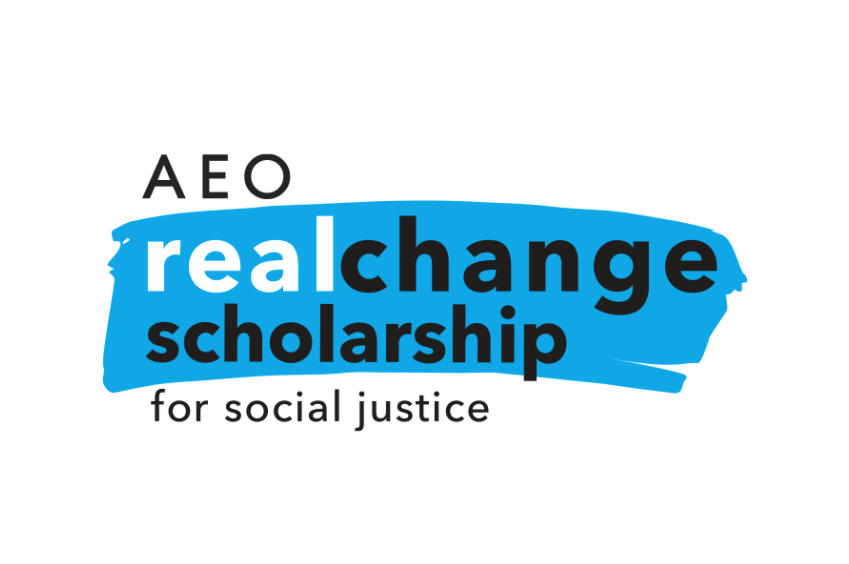 In 2020, AEO committed $5 million to the AEO REAL Change Scholarship for Social Justice – an educational fund to support associates who are actively driving anti-racism, equality and social justice initiatives in their communities.

Today, we are thrilled to announce the names of the 15 associates from across the U.S. who are demonstrating the power of their actions and voices to make REAL change! Here are the 2021 Real Change Scholarship Recipients:

Amarilys is a Brand Ambassador from Warwick Mall in Warwick, Rhode Island. She is pursuing a double major in Marketing and Spanish at Rhode Island College. Her social justice work includes volunteering and acting as Vice President of Unidos, an organization on her college campus that brings together minority communities and works to bring education events on social justice to campus.

Kennedy is a Brand Ambassador at Aerie in Florence Mall in Florence, Kentucky, currently enrolled as an Electronic Media and Broadcasting major at Northern Kentucky University. Kennedy participates in programming and works for Voices Amplified, an organization that shares stories of women who are making change in their communities.

Gabriel is a Sales Associate at the Florida Keys Outlet in Florida City, Florida who is in his last year of high school and currently applying to universities across the country. Gabriel has been volunteering with Achieve Miami for the last several years, including participating in virtual programming during the COVID-19 pandemic. He helped found the Sexual Health Awareness Club at his school, which advocates for awareness on sexual health and tackles topics such as sexual assault, STI’s, LGBTQ+ related topics, and birth control.

Emily is a Brand Ambassador at Carriage Crossing in Collierville, Tennessee who is working on her Bachelor’s Degree in Criminal Justice at the University of Memphis. She had an internship at the Memphis Bar Association and worked in the Juvenile Court in Downtown Memphis. She has taken many classes and internships related to law and social services and has seen firsthand how the criminal justice system operates – and how reform is needed to bring social justice to criminal proceedings.

Chamara is a Sales Associate in Florida currently enrolled at Eckerd College in Saint Petersburg, with a Major in Film and a Minor in Psychology. She is active in the African American Society Club and Diversity club at her school, and this year, she is the Director of Cultural events. In that role, she is responsible for creating events that promote inclusiveness and social justice. As a filmmaker, Chamara is focused on diversity and representation – she wants to make sure Black stories are seen and heard.

Leticia is a Brand Ambassador at Colorado Mills in Lakewood, Colorado, who is planning to enroll in Colorado State University and pursue Major in Business and an Interdisciplinary Leadership Studies Minor.  For Leticia, education equity is one of the cornerstones of our society. She is part of Student Voice and Leadership and acts as a representative for the groups’ policies and suggestions for school leadership. She is personally spearheading the effort to implement a Student Bill of Rights that will help provide appropriate support, representation and resources for all students.

Brandon is a Brand Ambassador at Jersey Gardens in Elizabeth, NJ. He is a senior in high school who is looking to pursue a Bachelor’s in Political Science. He has grown up learning about hard work from his single mother. In 2020, he partnered with DoSomething to bring awareness to political advocacy and voting for the 2020 election. In the fall of 2020, he was a panelist for the College Board Diaspora project, which is designed to amplify the history, culture and experiences of Black people all over the world. Brandon believes that education, resources, and equal opportunities are essential to ensure a bright future.

Olivia is a Brand Ambassador at Bellevue Square in Seattle, Washington who is looking to pursue a degree in English or Political Science. Olivia has done work with the Multicultural Student Union and as a senior during the most recent local election cycle, she joined the Emerald Youth Organizing Collective to push for youth engagement and progressive, intersectional policy in the Washington state legislature.

Reham is a Sales Associate at Cambridgeside Galleria in Cambridge, Massachusetts, currently enrolled at Simmons University in Boston, studying Political Science/Criminal Justice and Philosophy. She has always had to consider her dual identities as a Muslim Black woman – and when she joined the Black Student Union in high school, the group gave her the freedom to explore her identity and shape her social justice efforts. She continues to work as an activist for change, has interned for organizations run for and by the Black community, and explored the connections between race and politics.

Angelyvette is a Brand Ambassador at Viewmont Mall in Scranton, Pennsylvania, currently a student at Pennsylvania College of Technology studying Radiology. When she arrived on campus as a freshman, she was disappointed by the lack of diversity at her college. To address these issues, Angelyvette met with the Diversity Office and formed the One World Club with the goal of creating a community that every individual has a place to be their true, authentic selves.

Alyssa is a Brand Ambassador at the Avenue at Peachtree in Peachtree, Georgia, studying Biomedical Engineering at the University of West Georgia. Growing up as a person of color in a small, affluent, and majority-white city, she has learned first-hand about racism and the importance of social justice. She has used her social media platform to spread awareness and has focused her academic efforts on exploring topics of race and equality.

Alicia is a Stock Associate at the Exton Square Aerie in Exton, Pennsylvania, and High School Senior who would like to pursue Political Science for her Bachelor’s Degree. In 2020 she was inspired to help register and encourage her community to vote. She volunteered phone banking, text banking and worked with her school to hold a voter registration drive for eligible students. More than 65% of her classmates made their voice heard in the election – and Alicia is looking forward to pursuing new ways to drive civic engagement among her community.

Tiffany is a Brand Ambassador at the Fashion Outlet in Chicago, Illinois who has been shaped by her parents’ path as immigrants to the United States. She joined Students United for Change to encourage civic engagement within her community and helped to found Mujeres Unidas (Women United.) Last year, members of the group spoke at a gender and equity conference at a neighboring high school to educate on privilege and ways to bring change. She is passionate about immigration and immigrant rights and hopes to further her education in pursuit of change.

Jazmine has worked as a Brand Ambassador, Lead Cashier and Sales Lead at the Wyoming Valley Mall in Wilks Barre, Pennsylvania. She is currently enrolled at the University of Denver, with a double major in International Studies and Creative Writing. Over the last several years, she has attended leadership and academic programs centered around social justice, including Yale Young Global Scholars. In 2020, she created a list of resources for her Store Team to help educate and discuss social justice issues and partnered with Store Leadership to make sure that every associate received training from AEO Academy on social justice issues.

Skyler is a Sales Associate at the Annapolis Valley Mall in Annapolis, Maryland, and a high school senior from Baltimore City who wants to pursue Forensic Science and Biochemistry. From a young age, Skyler has been passionate about LGBTQIA+ rights. In a previous job, one of her colleagues, who was transgender, was being harassed. Skyler went to management and helped to start company-wide training for LGBTQIA+ initiates. She continues to attend marches and protests and looks for ways to lend her voice to those in need.