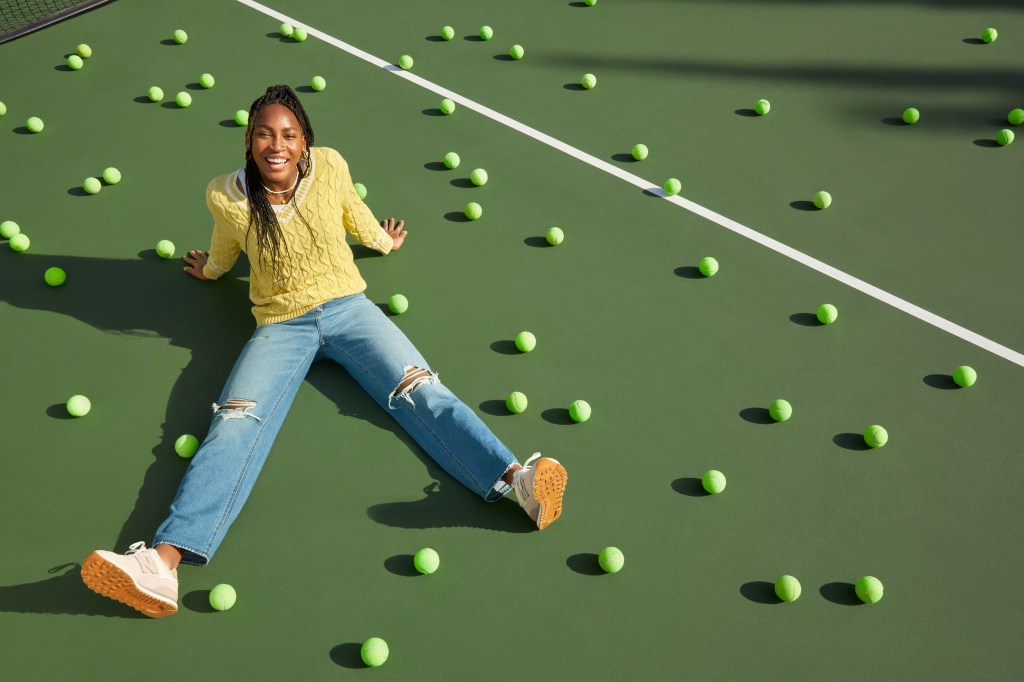 But the retailer offers a conservative forward-looking guidance based on macro uncertainties.

The retailer — parent company to American Eagle, Aerie, Offline by Aerie, Todd Snyder, AE77 and Unsubscribed brands — revealed quarterly and full-year earnings Wednesday after the market closed, improving on top and bottom lines and delivering on its promise to surpass the company’s fiscal 2023 operating-income targets two years ahead of schedule.

The firm’s success was driven by demand across the assortment (everything from activewear to loungewear to dresses), higher full-priced sell-throughs and lower promotions, rental savings and delivery efficiencies thanks to the acquisition of two different last-mile logistics firms last year, according to Michael Mathias, chief financial officer at American Eagle Outfitters.

“It’s a combination of revenue recovering in AE, revenue growth in Aerie and those gross-margin efficiencies that we’ve now built into our business,” Mathias told WWD in an exclusive interview. “We’ve reduced inventory significantly, reduced choice in sku counts by 30 to 40 percent, especially in the AE brand. We’ve reduced inventory in stores that used to be trapped there, which would lead to markdowns by 40 percent. That’s with the Quiet acquisition and the use of those additional facilities and nodes allowing us to replenish stores within a one- to two-day period, versus up to a week. And then those direct-to-consumer orders, not only from our own [distribution centers], but our nodes, really reduced delivery costs significantly, just by putting inventory closer to the end customer and reducing the number of packages, or what we’d call split shipments that would have to be sent to customers. Those are structural improvements we are intent on hanging onto.”

Those structural changes help explain the retailer’s recent quarterly and full-year earnings results, which were strong, despite continued uncertainty amid the pandemic, supply-chain challenges and inflationary pressures.

For the three-month period ending Jan. 29, American Eagle Outfitters’ total company revenues rose $216 million, or 17 percent, to $1.5 billion, up from $1.29 billion during last year’s fourth quarter. Revenues also increased in the retailer’s two biggest brands. At American Eagle, total sales grew 11 percent to $1.04 billion, up from $943 million a year ago. Revenues at Aerie surged 27 percent to $428 million, up from $337 million a year ago. That’s on top of last year’s 25 percent growth. Consolidated store revenue was also up, 32 percent for the quarter.

The company ended the quarter with $50.4 million in net income, up from $3.5 million a year earlier.

Meanwhile, total digital revenue declined 3 percent for the quarter, year-over-year. But Mathias pointed out that the decline is compared with 2020’s elevated digital numbers, when consumers were stuck at home on lockdown and stores were closed.

“Our digital business, versus 2019, is up significantly,” he said — 31 percent, when compared with 2019’s fourth quarter, or about 35 percent in the current quarter.

At the same time, consumers are returning to stores. While in-store shopping patterns are not quite back to pre-pandemic levels — thanks to lingering local lockdowns and other restrictions in certain areas — Mathias said, “It’s definitely a bit of a channel shift from digital back to stores. That happened during holiday and it’s happening again in the beginning of the first quarter here. It looks like stores are definitely still important to our customers.”

He added that the company — which has more than 1,100 stores across the entire portfolio, including stores in Mexico and Hong Kong — will “continue to optimize the fleet over time with cash-flow generation and income being a driver of the timing of when we’ll continue to reduce the store footprint for AE.”

The company has lease-term flexibility over many of its stores, with about 400 locations up for some type of lease action — either an expiration or kick-out — in the near-term, Mathias added. The plan is to reduce the number of AE stores from around 800 to between 600 and 700 over time, while increasing the Aerie and Offline store fleet by about 60 units a year, until it’s close to 500 or 600 stores. (There are currently about 441 Aerie and Offline locations.)

“It’s a combination of closing AE stores [and] getting rent renegotiations,” he said. “We’re getting favorable deals from our new Aerie and Offline locations. And we’re going to take a data-centric approach, where we’re actually measuring the customer and revenue transfer that is happening as we close these locations. Just to make sure we’re comfortable with the sales transfer when we close the store to other stores or our digital channel, before we make that decision. We’re measuring that pretty much every quarter.”

American Eagle Outfitters logged nearly $420 million in profits for the year as a result, compared with losses of $209 million a year earlier.

“2021 was a milestone year for AEO,” said Jay Schottenstein, AEO’s executive chairman of the board and chief executive officer. “We entered 2022 a stronger company, supported by our powerful brands, a proven strategy, improved discipline and strategically advantaged operations. While the macro environment remains challenging and we are taking this into account in our plans for the year, we expect our results to still reflect meaningful progress versus prior years, setting a new baseline for profitability. As I look further out, I couldn’t be more excited as we build on our success and deliver returns to shareholders.”

Still, the company is not immune to macro challenges, which helps explain AEO’s conservative forward-looking guidance. For the full 2022 fiscal year, the retailer expects operating profits to be in the range of $550 million to $600 million, compared with adjusted operating profits of $603 million in 2021.

“Due largely to stimulus in the first half of 2021, which contributed to an extraordinary spring season, combined with continued freight pressures, we are forecasting an earnings decline in the first half, followed by a recovery in the second half as we lap elevated air freight due to factory closures and inventory flow challenges last year,” the company said in a statement.

During the most recent quarter, headwinds included an additional $80 million in freight costs ($90 million for the full year). The firm said approximately $60 million of that was air freight specific to Vietnam factory closings in the most recent quarter, or $70 million for the year. Approximately half of the freight costs were related to Aerie and the balance to the American Eagle brand.

“Without that, we would have been a $170 million [operating-income] number, which is really significant to the last few years,” Mathias said, adding that rising freight costs are included in the guidance.

“We’re pleased so far with the trend in spring as we head into March, but I think everyone is waiting — including us — to see the mid-March period that we’re up against [compared with] last year. That was when the $1,400 [stimulus] checks started rolling out,” he continued. “We definitely saw a significant increase in our business back at the end of March and into April last year and we’re waiting for that period [again this year] to get an understanding. We’re up against that and if the customer is starting to feel some of the inflationary pressures this year and how that’s all going to play out along the next several months.”

There’s also the escalating conflict in Ukraine, which could potentially impact consumers and their willingness to spend, of which Mathias said, “It’s something — depending on how long this lasts, because it’s not going to help supply chain disruptions and, or costs — we’re just keeping an eye on. The correlation to how long this lasts is definitely going to be something we’re going to be keeping an eye on for our business. In the week that it’s been — or the six, seven days — we haven’t seen anything specific that’s impacting the customer yet.

“And if oil prices per barrel continue to increase, that’s not going to help freight costs either,” he added.

American Eagle Outfitters ended the quarter with nearly $435 million in cash and cash equivalents and $341 million in long-term debt.

Shares of American Eagle Outfitters are down approximately 16 percent, year-over-year.

“Our hope is cautious guidance,” Mathias said. “Our $800 million [operating income] bottom line that we’re focused on in 2023 is still definitely achievable and in reach based on what we’re planning to achieve this year.”