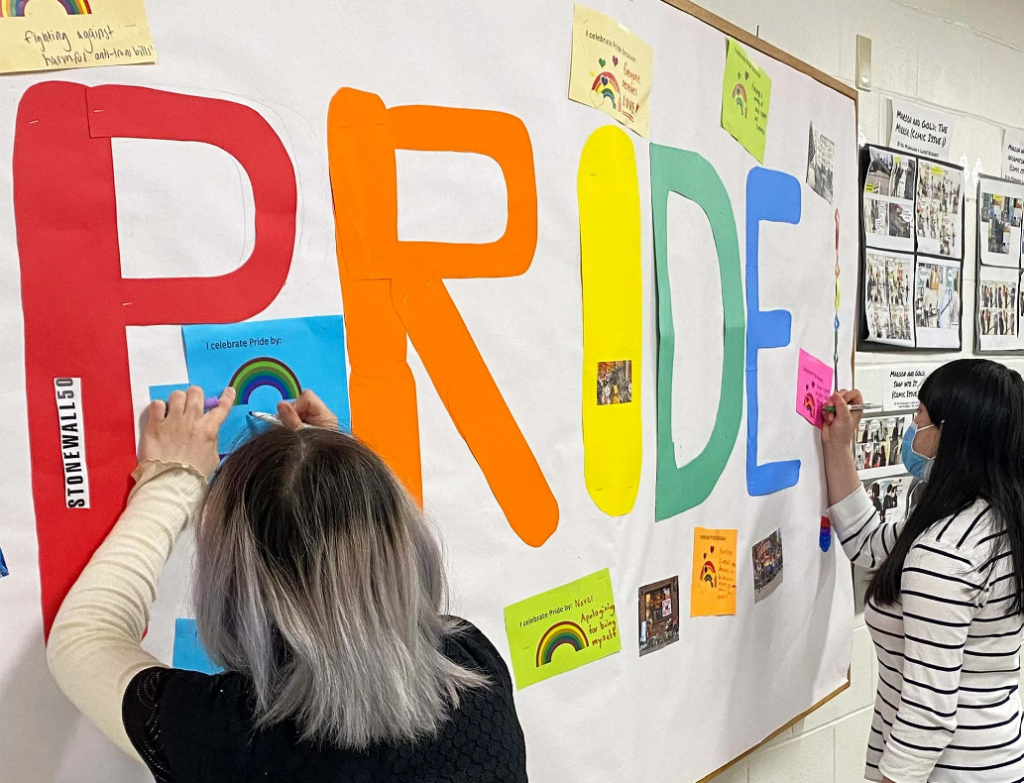 By: Dawn Ennis | Link to article

For progressives still reeling from Friday’s Supreme Court decision overturning Roe vs. Wade and Monday’s opinion watering down the divide between church and state, the slogan, “It Gets Better” may be needed now more than ever, even if it’s harder to believe it’s possible in this highly charged political climate.

The hope is, it will indeed get better for thousands of LGBTQ+ students across America, thanks to the latest effort by the It Gets Better Project, founded by author and activist Dan Savage and his husband Terry Miller in 2010 and sprung from a social media campaign aimed at providing hope and encouragement to young LGBTQ+ people. It’s grown from a slogan to the world’s largest storytelling effort dedicated to uplifting and supporting LGBTQ+ youth. The non-profit organization today announced the recipients of its biggest initiative yet: $500,000 in grants to public and charter middle and high schools in dozens of U.S. states.

“If there’s anything that I’ve learned over the last six plus years. prior to my life at It Gets Better, I was in the healthcare field, it’s that our rights are a conversation,” said Brian Wenke, executive director of the It Gets Better Project. “We can’t take our foot off the gas. And with the evolution of social media, it makes every single issue that our community is impacted by seem that much more intense. And the conversations that we’re having are even more polarized than they were pre-2010, before the It Gets Better Project was even formed.”

The announcement of the grants comes on the 53rd anniversary of the start of the Stonewall Riots that are seen as the start of the LGBTQ+ rights movement, a nod to both today’s elders who were so young then, but also a belief in the next generation of activists.

Support for the initiative comes from the clothing brands American Eagle Outfitters and its subsidiary, Aerie, through customer donations from all 50 states via their Real Rewards loyalty program, as well as in-store pin-pad promotion during Pride Month 2021.

“It is incredibly gratifying to know that the support of AEO and our AE and Aerie customers is giving students across the country the chance to create more inclusive communities within their schools,” said Jennifer Foyle, president and executive creative director, AE and Aerie, in a statement. “We are so proud of the partnership we have built with It Gets Better Project and the positive impact our work together has upon empowering and uplifting LGBTQ+ youth.”

The initiative, 50 States. 50 Grants. 5,000 Voices, was announced in November 2021, giving middle and high schools in every U.S. state, including U.S. territories, the opportunity to submit a proposal for a grant of up to $10K to fund new school projects. Schools had to commit to use the money to uplift and support the wellbeing of local LGBTQ+ students. This inaugural year of the initiative unfortunately fell short of reaching every state in the union, Wenke told me.

“The goal was 50, but we couldn’t be on the ground in some states, and not every state participated,” he said. “So what we’re going to do is we’re going to take that understanding, and knowing where there are certain, obvious pockets in the country that are maybe less likely to jump on board with something like this, we’re really going to focus on making sure that they participate in the next iteration of this campaign, which will launch in the fall.”

The organization said grants of $10K apiece were prioritized to schools that demonstrate a diverse student population, have a recognized Title I status, have shown documented support for LGBTQ+ students, and have established a Gender and Sexuality Alliance or a similar club.

“They are based on proposals that were submitted to the It Gets Better Project by LGBTQ+ students who had to partner with an educator and or administrator to present a project that showed demonstrated ability to create a more inclusive environment for LGBTQ+ students,” said Wenke.

The winning projects include a school in the conservative area of Mission, Texas, which will be using the funds to create a regional Queer Youth Conference; a school in Maine that is creating a Gender Sexuality Alliance to train educators and administrators on LGBTQ+ knowledge; a Colorado school remodeling single-gender restrooms into gender-neutral ones; a school in Minnesota which will offer an LGBTQ+ history and pop culture class; and a gender-inclusive closet providing affirming clothes for trans and gender nonconforming students in New Mexico.

It Gets Better has grown into a global organization reaching millions of young people each year through its media programming, educational resources and international affiliates in 19 countries across four continents, with 50% across Latin America, where being out poses risk to life and limb.

“A lot of them are offering safe hours, where LGBTQ+ youth can engage with trained mental health professionals in an anonymous setting, usually through some sort of online interface,” said Wenke. While that’s not offered in the U.S., given that other organizations provide that service, It Gets Better has launched a new program called Youth Voices.

“Every year we, we recruit youth ambassadors, ages 13 to 18, to join our network,” he said. “We provide them with mentorship opportunities, specifically around how to leverage media. We provide them with media kits that include an iPad and all of the things that they need to film themselves, should they be called upon to share their stories. They work with us all year long, they publish zines, they help us with some of our brand partnerships and they weigh-in on a lot of the activities that we are doing. They are very much our clearinghouse, and in some respect, make sure that our programming that is designed for the benefit of LGBTQ+ youth is actually benefiting LGBTQ+ youth. They’ve been an invaluable resource for us and we are actually bringing out the next cohort to Los Angeles the week of November 7th when we’re hosting our first ever youth summit.”

Wenke said it’s efforts like its Youth Ambassador program and these new grants that show where the organization is headed.

“I think It Gets Better has been very aware of the nuances of acting locally and what that means, and recognizing that we don’t have all of the answers, but we know people who do. It’s usually the people on the ground that are experiencing what their local community is throwing at them. So, that’s where the ‘empower’ part of our mission comes into play, is that we are putting money in the hands of LGBTQ+ youth who are actively interested in working to create a better environment for themselves and their peers in their local community.”

Find out more about the It Gets Better Project by clicking here. More information about the organization’s youth ambassador program, Youth Voices, can be found here. For a list of recipients of grants, click here.