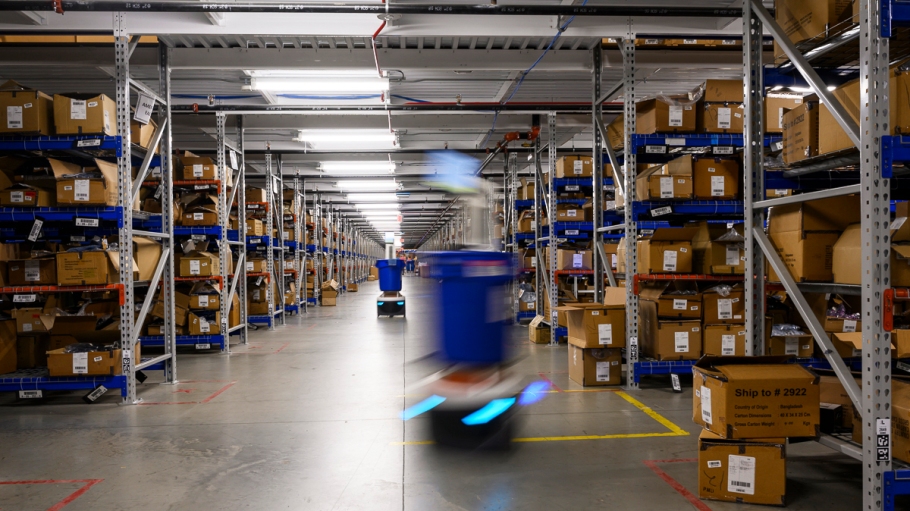 By: Kari Hamanaka | Link to article

Pictures of delivery packages stacked like a game of Tetris at someone’s door have become points of pride posted in the deep recesses of driver online forums.

However, these packages—five, six, seven and counting—arriving at consumers’ doorsteps daily across the country have become nightmares for cities’ residents and the environment, along with companies’ bottom lines, as Quiet Platforms works on the retail industry’s logistical reinvention.

“What we are trying to do is basically stop the chaos and find a better way to compete in the future,” said Shekar Natarajan, executive vice president and chief supply chain officer of American Eagle Outfitters Inc. and head of AEO’s logistics subsidiary Quiet Platforms.

The logistics company earlier this month revealed a universal delivery label that, at its simplest, creates a unified network among the more than 40 carriers it counts as partners. Quiet is on the second prototype of a modular, collapsible delivery container system called Tag Along that will be released as a pilot by the end of the year. All of this is happening as Quiet, currently in 10 markets, expects to more than double that footprint to 22 markets by mid-June of next year.

The totality of these efforts connects largely disparate, but major, players within goods movement to create a functioning system that’s eco-conscious but also saves money as consumer demand only continues to ramp for delivery of everything from meals and groceries, to outfits and home goods.

The universal delivery label, while mundane in name, is critical to Quiet and Natarajan’s ambitions.

Currently, a customer can order, for example, a T-shirt from a business. That item is then shipped through a carrier’s network, such as a FedEx or UPS, depending on cost, service offered and where the package is going. A label is then placed on that package, that allows it to only travel within that one carrier’s network.

In today’s increasingly complex transportation systems and all the factors that could potentially impact service performance and cost, staying within one carrier network can be limiting.

Things happen. Flexibility, Natarajan pointed out, gives shippers the ability to recover from disasters or, in some cases, avoid them by making-last minute tweaks. It also allows the ability to pick and choose carriers to trim costs.

“Creating a universal label unchains the concept,” Natarajan said. “You’re no longer tied to that carrier at that time of initiation of the label, and so then I could pick a first mile carrier, a different middle mile carrier.”

The flexibility to plug a package into different networks means everything when speed is linked with brand.

When American Eagle paid $350 million for what was then called Quiet Logistics in late December 2021, which came on the back of its purchase of AirTerra, it signified to the markets a shift in thinking: that logistics is now king.

American Eagle executive vice president and chief operating officer Michael Rempell said as much in May during the company’s call with analysts.

“We believe that edge fulfillment, share distribution and shared logistics is going to be as transformative to retail as the shift to omnichannel was a few years ago,” Rempell said.

The thinking’s won over a number of believers.

Natarajan said Quiet’s nabbed 14 new clients since the American Eagle acquisition, adding to the more than 60 brands now utilizing its services. Customers include, of course American Eagle and sister brand Aerie, along with Outdoor Voices, Birdies, Baggu, Steve Madden and Peloton. More recent additions include Fanatics and Saks Off Fifth.

“Our pipeline is the strongest it has ever been in the history of Quiet,” Natarajan said. “So, obviously, we are moving in the right direction. We are excited about it. We are in a hurry to go build this scale because scale is what’s needed to get this thing to be really efficient as a network.”

While the universal label is important, the backbone to that infrastructure are the fulfillment and consolidation centers. The company is eyeing top metropolitan statistical areas to grow, largely following the same path of where carriers have built their regional networks in places such as New York, San Francisco, Los Angeles, Dallas, Chicago, Miami, Orlando, Charlotte, Atlanta and on.

One of the biggest misconceptions in the media with Quiet’s ambitions is that it’s somehow looking to compete with that of an Amazon Logistics or Walmart. That’s not the aim or the purpose, Natarajan said.

That’s one of the reasons Natarajan said the company doesn’t see the need to build out its own transportation fleet, which would pull it into the parcel carrier business. That would just add to the existing problems logistics, largely e-commerce logistics, creates.

“We are basing the premise on the fact that there’s so much capacity, the world doesn’t need to add more trucks on the ground,” he said. “They need to share better and if they’re able to share better, the economics is obviously lower and you have the advantages of a big player without being a big player.”

The process of getting competitors to be open to the concept of sharing will not happen immediately and the supply chain chief acknowledged that.

“It’s like anything,” he said. “There is 20 percent of the crowd, which is excited and they understand the world that we’re all living [in] and we’ve got to do it. And 60 percent is kind of wait and see, and 20 percent is really reluctant. We see that this change is no different from what we’ve seen in our own organizations. I don’t change my breakfast every day. In the morning, I eat the same thing every day, so why do I expect the world to change for what I want to do?”

Logically speaking, Natarajan brings up a point he has said countless times at conferences and in interviews when he’s talking about Quiet. That is, brands compete on product. The back-end, to a certain extent, brands already share in the way of factories. Logistics, he said, should be no different.

Quiet’s not stopping with its expanding real estate footprint, the delivery label and the new container system it’s set to soon pilot. Natarajan said the company has “big plans” on the last mile that will soon be revealed.