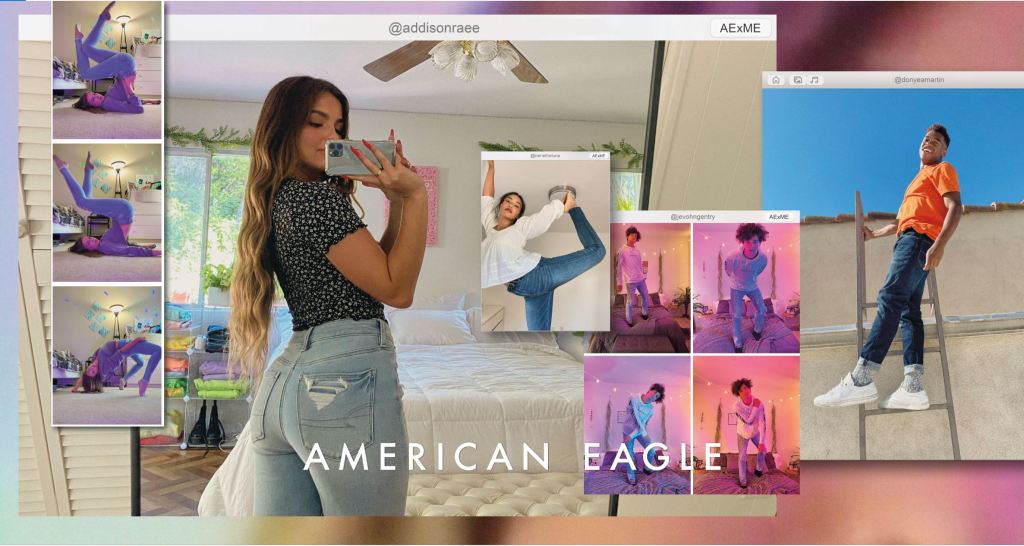 A diverse cast created TikTok-inspired films that will air on the retailer’s social media channels.

What’s the best way to create an ad campaign during a pandemic? If you’re American Eagle, you ask your loyal customers to do it for you.

The teen retailer reached out to a cast of real kids for its first virtually produced back-to-school campaign. The young men and women directed, shot and produced their own TikTok-inspired films through Zoom, smartphone photos, Polarioids and camera film. They received tutorials on how to do their hair and makeup by artist Allie Smith and then shot and styled themselves in the brand’s jeans, tops and accessories. A video for the campaign is set to the song “Boa Noite” by Tropkillaz and will be featured on American Eagle’s social media channels beginning Tuesday.

“At American Eagle, we are always looking to engage with our customers on how and where they are spending their time — TikTok has become increasingly important,” said Chad Kessler, global brand president for the retail chain. “Although back-to-school may look different this year, we know that our customers will continue to express themselves through music and dance and that social media will remain the number-one way they interact. Technology, innovation and social media offer AE an opportunity to connect our community with each other, and our brand, even if we aren’t physically together.”

He said even though the featured cast members were given tutorials by the brand, “they did everything in their bedrooms and houses. It’s really remarkable.”

The campaign features teens who have a wide variety of backgrounds in dance, ranging from ballet and jazz to hip-hop and tap. The cast includes Donyea Martin, Hannah Hawkins, Irene Luna, Jevohn Gentry, Makayla London and Sumi Oshima along with creator Addison Rae, who has more than 50 million TikTok followers and is the second-most-followed person on the platform. Addison has worked with the brand in the past, notably for its prom campaign this spring.

“I have been wearing American Eagle jeans for as long as I can remember, so being a part of the back-to-school campaign felt authentic to my real style,” Rae said. “AE understands what my generation wants, and I love how the brand empowers kids to express themselves, which for me is through music and dance.”

The campaign also serves to promote the company’s newest denim fits, the Dream, a body-hugging model with four-way stretch for women, and the AirFlex+ Athletic fit stretch model for men.

Kessler said that although the company’s stores were closed for months because of the pandemic, its jeans business continued to be strong online as well as when the stores reopened “and people started thinking about back-to-school.” And although it’s still uncertain whether kids will be returning to school this fall in many parts of the country, Kessler said American Eagle is still committed to dressing them, even if they attend classes virtually.

“Kids lost so many things this year and we’ve tried to be there for them in a virtual environment to provide social and digital engagement and let them know they’re not alone,” Kessler said.