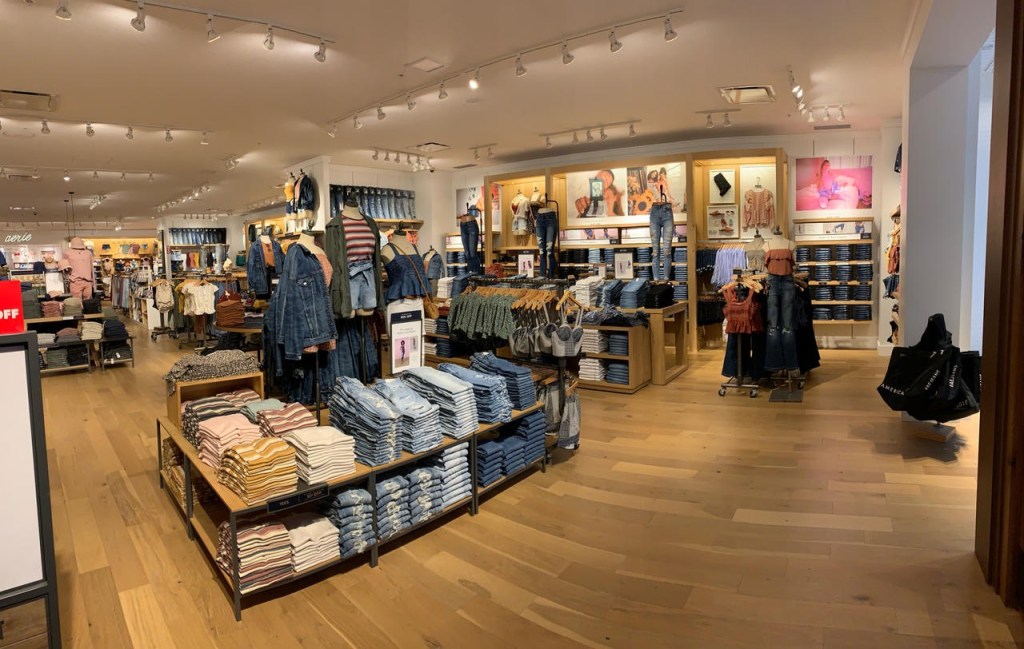 A year ago, a shopper at an American Eagle store would come into the store, browse a selection of tops and denim, pair a few things together to try on as an outfit, wait for a cashier, pay and leave. Now, a consumer can walk up to a kiosk outside select stores, scan a QR code, and collect a perfectly sized and styled outfit at the store within an hour. The teen-centric retailer also offers curbside pickup and is beginning a trial of pickup lockers for merchandise purchased online.

The changes are an example of how the pandeimc has forced the retail industry to modernize at a breakneck pace.

“These are concepts the industry has been talking about for the last two or three years, but they’re scaling at a tremendous rate,” says Craig Brommers, a former Gap marketer who joined American Eagle as chief marketing officer earlier this year. The retailer’s marketing will focus on quick and frictionless shopping for the remainder of the year, if not longer.

When the pandemic struck in March, scores of retailers were caught unprepared. Very few were operationally ready for things like buy online, pickup curbside—and social distance shopping was a completely alien concept. But stores soon realized they had no choice but to meet shoppers anywhere they could get them, forcing them to accelerate delivery programs and market in new ways. Ulta Beauty announced plans to open mini stores inside Target stores, giving it access to new foot traffic. And brands like Bloomingdales, Dolce & Gabbana and American Eagle focused on virtual events as a way to bolster sales. Chains like Walgreens introduced new loyalty programs and pickup programs; while Walmart streamlined how inventory levels are connected to marketing.

“You can’t put the genie back in the bottle,” says Ruth Bernstein founder and CEO of Yard NYC, an agency that works with retailers including Kohl’s and Athleta. “We’ve all heard about the acceleration of digital and how change has come so fast in such a short time—you don’t go backwards from that convenience. Consumers have been introduced to new retailers, they’ve changed their habits—that isn’t going to go away.”

The changes come as brands experience a rollercoaster ride of retail sales trends that marketers hope will end on an upswing. After a dire spring, sales rebounded so much that the National Retail Federation predicted an increase in holiday sales between 3.6% and 5.2% to as much as $766.7 billion this year. Though the number of shoppers who made purchases during the five-day period starting on Thanksgiving and ending on Cyber Monday declined to 186.4 million from 189.6 million last year, many experts attribute the shift to an earlier start to the holiday shopping season and less importance placed on Black Friday itself.

As the year closes out, retailers are plotting their strategies to come up with a winning formula that makes the most of the operational and  marketing pivots of 2020.

“It’s this notion of the new retail,” says Barbara Kahn, Patty and Jay H. Baker professor of marketing at the University of  Pennsylvania’s Wharton School, noting that retailers need to begin thinking about the “implications of curbside delivery” as they consider “what people want to get in store and what they will pick up by car.”

Below, a look at which retail innovations are here to stay.

1. The store associate of the future

The role of a retail employee has drastically changed, prompting associates to adapt skills to move seamlessly between the in-store and online experiences. Affluent fashion brands such as Dolce & Gabbana now allow customers to book a virtual appointment with a live sales associate who can take them on a video tour of the boutique, create a shopping list and purchase items. Some Lowe’s employees are now social distance ambassadors, ensuring shoppers stay six feet apart, while Ulta employees now  train customers to use and interact with the brand’s GlamLab digital app to see virtual beauty looks.

While Bloomingdale’s also offers virtual shopping appointments, its employees now do double duty as event hosts for the digital events the brand now produces. In the past, Bloomingdale’s would host some 400 in-person events each year at its 59th Street New York City flagship; the retailer has pivoted to 60 virtual events over the last six months, according to Chief Marketing Officer Frank Berman. Customers interact with designers and chefs through group chats.

“[With store events], you were limited to the audience you could have based on geography, but with these virtual events, we can really open them up to our customers across the country and around the world,” says Berman, noting that Bloomingdale’s will continue with such events post-pandemic. “The drop-off is really low, and we’ve learned a lot on content and what keeps people engaged and the type of audience that chooses to participate.”

2. Social commerce is here to stay

Linking online entertainment to ecommerce is something that Chinese brands have been mastering for years, but the trend only began to take hold in the U.S. during the pandemic. American Eagle, which as a teen brand, caters to younger consumers, has had success with a virtual store on Snapchat it debuted for the holiday season. In the first five weeks, the store generated more than 41 million impressions from customers who booked nearly $2 million in sales, according to Brommers. Fresh “skins” that highlight different products and collaborations, like a product partnership with PS5, keep shoppers returning every few weeks.

“It tells me social commerce is something that is in fact scalable and it’s here to stay,” says Brommers, noting that American Eagle will continue to explore new stores with Snap. “We’re pushing ourselves and Snap to some extent to up our game to deliver a better immersive experience.”

3. Meeting the consumer where they want to be

As retailers have explored new ways to deliver goods—by having customers pick them up outside the store from their cars, from kiosks or from lockers inside the store—they’re thinking ahead to what things shoppers will want to buy in-person,  and what they would prefer to have delivered. Early in the pandemic, Walgreens rolled out drive-through pickup options along with curbside services.

Once cutsomers buy good on their own terms, “they are not going to want to move away from it,” says Stefanie Kruse, VP of digital commerce and omnichannel at Walgreens.

Marketers are also rethinking existing floor space in a way that makes the most sense for the new digitally-adept customer. Best Buy executives recently said on an earnings call that the chain will transition half the square footage at some stores from shopping space to online order fulfillment. A spokeswoman declined to comment further.

“There’s still an incredible need for physical stores—that’s where you build a relationship between brand and consumer, but we just have too many of them and we will see reductions in numbers,” says Michael Brown, a partner in the consumer practice of Kearney, a strategy and management consulting firm. “We will see the change in the role of the store not just about ‘Come in and buy from me’ today but it will be ‘Come in, have a brand experience, build your shopping list, let’s connect that on your cell phone so we can directly market to you.’”

Experts also predict an increase in brand partnerships as an awareness-building marketing strategy. Ulta’s Target deal is an example. Its shop-in-shops within Target stores will roll out to 100 Target stores nationwide next year, with hundreds more in the works. The deal is meant to further Ulta’s reach; early in the pandemic Target stores remained open because they were essential retailers.

“This was a year where thinking about bold moves and new ways to meet the consumer where they are is the new norm,” says Shelley Haus, CMO at Bolingbrook, Illinois-based Ulta.

Marketers selling in-demand items, like toilet paper and other essentials, learned early this year that an unhappy consumer is a vocal customer. Many retailers rejiggered their marketing to make sure it was better linked to inventory levels of merchandise, so as to not advertise something that is not available.

Before COVID-19, Walmart was spending a lot on mass media to convince shoppers to buy its grocery items—but shortly after the pandemic, stores were challenged in fulfilling orders at the same pace that was driving demand, Cynthia Kleinbaum Milner, VP of marketing for Walmart+ at Walmart, said at a recent Ad Age conference. “We ended up connecting teams closer—the marketing and operations team—to identify when we can drive demand to our store and when we can hold off, to make sure the customer experience was positive,” she said.

Ulta’s Haus says their stores experienced something similar— at one point, digital demand was so high that Ulta was having trouble meeting customer expectations and had to pull back on marketing and communication so they could fulfill orders. Retail experts expect that savvy brands will continue to keep communication open between inventory levels and marketing.

Brands spent the better part of the year exploring more creative ways to produce ads quickly and adapt to the new environment. They must adapt their media planning to the new reality, striking deals with more flexible arrangements, rather than locking into long-term buys. In March, Ulta turned off its TV, radio and print advertising and poured marketing dollars into streaming, digital and social media.

“The ability to make shifts like that and set ourselves up so we could make shifts like that forever more, that’s something that’s key when our teams and our media teams are working with our media partners,” says Haus, noting that such flexibility extends to creative as well. “We’re not going back to the traditional thoughts about timelines and who needs to be where for what when we think about creative. The amount of creative and the numbers of changes that we can go through in a short period of time to stay relevant is a big learning and we can do that too.