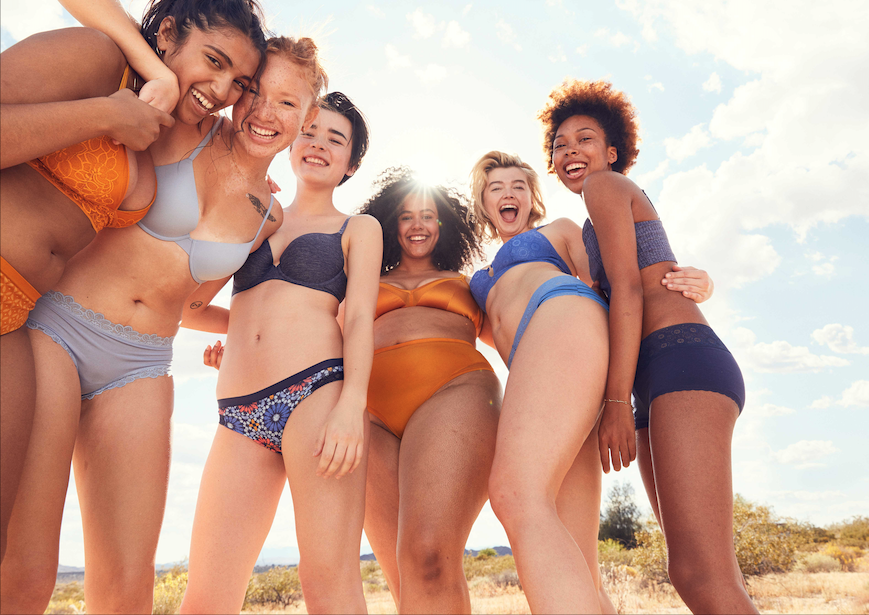 Aerie, the underwear brand run by American Eagle Outfitters, is continuing to pick up traction among a generation of young shoppers and says it will double sales to $2 billion by 2023, the company told investors on Thursday.

The growth is being fueled by fast-rising online sales, a push into middle America and a new line of athleisure clothing, as well as a marketing strategy that shuns the supermodel look of Victoria’s Secret in favor of more everyday women.

Aerie has been a bright spot for American Eagle Outfitters, a 44-year-old retailer still managing to find success at America’s malls. A key to that success: teenagers, who continue to call it one of their favorite brands, according to Piper Sandler’s semiannual survey.

The underwear brand has posted double-digit growth—often over 20%—every quarter for the last six years. It now lays claim to 6.7% of the women’s lingerie market in the U.S., up from less than 2% in 2015, according to research firm Euromonitor. Meanwhile, Victoria’s Secret has fallen out of favor with many shoppers, with its market share declining sharply from 32% to 21% in the last five years.

“Aerie is wildly successful,” says Cowen & Co. retail analyst Oliver Chen. “It has struck a chord with a new generation of shoppers.”

The success of the brand has helped offset recent challenges at the American Eagle brand, which reported double-digit declines in revenue last year. With more than 900 stores located inside malls, the chain popular for its denim-wear has been hit by temporary store closures and weak foot traffic during the pandemic. In September, it announced it would be closing as many as 50 stores by the end of the year and evaluating several hundred additional locations where its leases will soon be expiring. It had a tough holiday season and its revenue is expected to stay flat through 2023, the company said on Thursday. Aerie sales surged 34% in the quarter ending November 2.

The offshoot brand is known for a robust assortment of leggings, sweatshirts and other loungewear, in addition to bras and underwear, all of which have a “soft and cozy” feel, says Chen. It has benefited from a smaller store base and the shift to casual dress as people spend more time at home.

Much of Aerie’s success can be traced back to a decision executives made in 2014 to stop photoshopping images, a pioneering move in an industry long dominated by Victoria’s Secret, known for its sexualized images of airbrushed, scantily clad supermodels. Aerie has also featured real women with all kinds of body types in its marketing as part of its #AerieReal spokesperson program since 2016. Representing the brand are women like plus-size model Iskra Lawrence, gold medal Paralympian snowboarder Brenna Huckaby and poet Cleo Wade.

“We are the anti-supermodel,” said Jen Foyle, chief creative officer at American Eagle Outfitters and global brand president for Aerie, in an interview. “I have to say, it didn’t happen overnight. It was a tough act to follow,” she said, referring to Victoria’s Secret.

A raft of new entrants like ThirdLove, True & Co. and Parade have caught on, similarly opting to downplay sex appeal and instead champion the beauty and authenticity of real women in their marketing campaigns. CVS also followed Aerie in 2018 when it said it would clearly mark all beauty product images across its 8,000 stores as either altered or unaltered, prompting many of its brand partners to lay off the photoshopping.

Aerie is betting there is plenty of business for the taking. With its sights set on the $65 billion that American women spend each year on intimates, soft apparel, swim and activewear, it is embarking on a push to attract more customers in the middle of the country and on the West Coast. It already has a strong presence on the East Coast, where it is based. In July, it launched a new athleisure brand called Offline, which sells $55 leggings and $35 sports bras.

A key component of its marketing strategy: Get Gen Z customers talking about the brand on social media platforms like TikTok. In April, it asked TikTok teen star Charli D’Amelio (follower count: 106 million, and second on Forbes’ list of the site’s highest earners) and its network of #AerieREAL spokespeople to share three things they were grateful for. The campaign generated over two billion views on TikTok, as well as an 855% increase in traffic to the site. “We engage our community like there’s no tomorrow,” says Foyle.

Other times it gets lucky. In November, TikTok creator Hannah Schlenker (follower count: 750,000) posted a video of herself, unsolicited, dancing in a pair of high-waisted crossover leggings from Offline in November. It garnered more than 58 million views in two weeks, plus 708,000 searches for the legging on the Aerie site and an 185,000% increase in searches on Google. After selling out, the company quickly placed five new orders and offered to pay her for subsequent posts.

“My phone was lighting up,” said Foyle. “I had moms writing to me, asking if there was any chance I could get them that legging.”