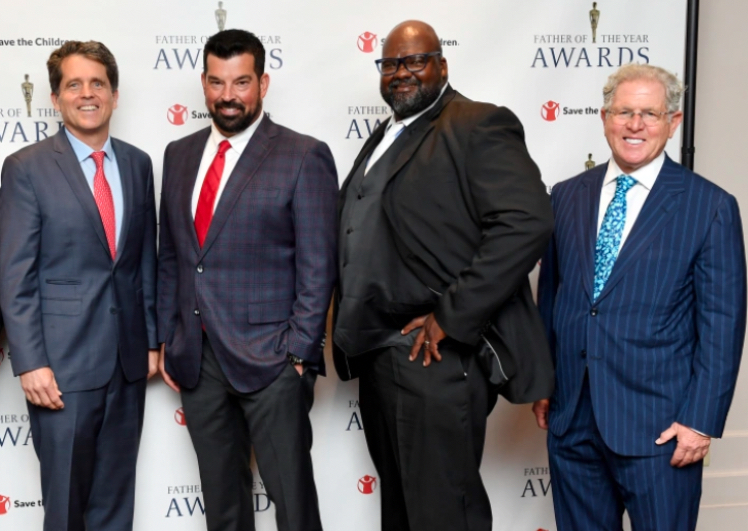 NEW YORK — Hugs and handshakes were rampant among top executives in the menswear industry when, after a two-year pandemic-fueled hiatus, they were able to meet again in person at the Father of the Year luncheon.

This year marked the 80th edition of the event, which shines a light on fatherhood and also serves as a fundraiser for Save the Children’s U.S. programs.

All told, the luncheon raised around $900,000 for the organization, according to Dan Orwig, president and CEO of the Father’s Day/Mother’s Day Council and president of Peerless Clothing.

Mark Shriver, emcee and special adviser to the CEO of Save the Children introduced Jason Nalls Sr., a truck driver and father of four from Newnam, Georgia, who won the Ashok C. Sani All-Star Dad award. His 12-year-old daughter read the essay that wooed the judges and outlined how, as a deacon of his local church, a mentor to student athletes and a volunteer at a local cancer institute that spearheaded the saving of a local community center, he epitomizes strength and service. “My dad is a big deal,” she said.

Nalls initially thought the award was a joke, but when he realized it was for real, said with a laugh: “It means I’m doing something right.” He attributed his skill as a dad to his parents, who taught him to be kind, courteous and to always treat people with respect.

Next up was Price, who said it would be impossible to be a father of the year without a mother of the year, a role model like his own dad who wasn’t perfect but would strive to be a little better every day, and his two children.

Price got emotional when saying that his job, which afforded him the opportunity to travel extensively covering weather events around the country and visit military installations in the Middle East, was “intoxicating,” but paled in comparison to being a father.

“The greatest thrill, joy, title and work is being a dad to Eli and Caroline,” he said.

Schottenstein, a father of three sons and “six — soon to be seven” grandchildren, said that even though his own father has been gone for 30 years, he still thinks of him whenever he has a decision to make. From his dad, he was taught to be considerate, have a strong belief in God and to help others, attributes he tries to pass along to his children and grandchildren.

The event wrapped up with the award to Day, whose son Ryan Jr., or RJ, was proudly videotaping his father’s speech on his phone from the back of the room, where he was seated with his two sisters. Day said he was honored to be a part of an event that imparted positivity and recognized people who have an impact on other people’s lives.

Although he lost his dad at the age of nine, Day said he was lucky to have other men — relatives and community members — step up to fill that void. “I recognized things in those men that I respected and grabbed on to them,” he said.

And these skills are the things he strives to pass on to his kids. “There’s no handbook to being a dad and a husband,” he said. But he has learned that the best way to live life is to learn from the past, not worry too much about the future and just “be in the moment.”