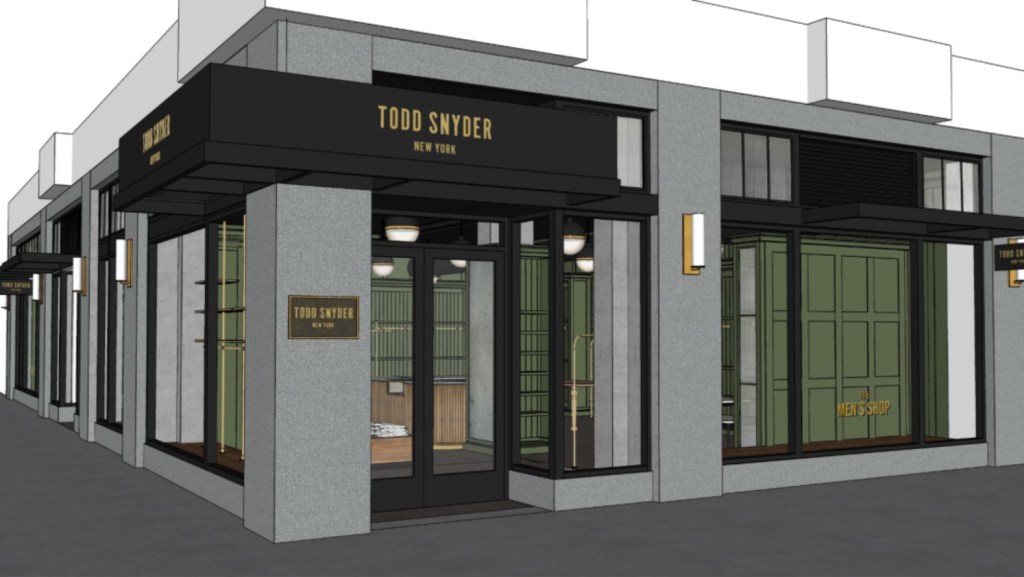 The menswear brand is adding units in San Francisco and Los Angeles as well as Boston.

During a walk-through of his spring men’s collection, the designer revealed he is planning to open three stores this month — including his first outside of the New York City area — followed by another handful next spring.

Snyder operates six units: the original in Madison Park, as well as Rockefeller Center and TriBeCa (the Liquor Store) in Manhattan; Williamsburg in Brooklyn and East Hampton, New York, and Greenwich, Connecticut.

Snyder said New York represents 40 percent of the brand’s business but Los Angeles is the company’s second-largest market, accounting for 20 percent of overall sales. He opened a pop-up in L.A. about a month ago, and “the customer welcomed us. It was a real eye-opener and it showed us what we needed to do.”

All of the new units will offer the breadth of the Todd Snyder men’s collection as well as an assortment of third-party brands and exclusive collaborations such as those with Champion and D.S. & Durga along with Assouline books, mules and bags by King Kennedy Rugs and a shoe shop with brands including New Balance, Converse and Alden. Snyder will also use the stores to highlight his long-standing partnership with New York eyewear brand Moscot.

The L.A. and San Francisco stores will offer vintage watches and jewelry from Foundwell and the L.A. store will include an Aesop in-store shop featuring the company’s grooming and fragrance products as well as an installation from Mr. Goodboy Records of an in-store vinyl record bar where customers can buy new and vintage records.

“We’ve taken our time with expanding outside the New York metro market and have been very strategic when choosing new locations by carefully assessing each city and where our key demographic is more apt to shop,” Snyder said. “We’ve spent a lot of time growing Los Angeles metro to be our second largest e-commerce market, so when it was time to map out our expansion, this was the most important market to begin planting physical roots for our customer.”

Beyond that, Snyder revealed that in the spring he will open stores in Dallas, Bal Harbor, Florida, and Chicago.

Overall, he envisions the brand having 10 to 15 total stores in major markets across the U.S.

He said the existing stores are performing quite well and the oldest units — Madison Park and the Liquor Store, which were the only ones that were in operation before the pandemic — are showing 30 percent sales increases over 2019.

But that’s part and parcel of the strength the brand has been experiencing overall, he said.

“We’ve seen an amazing growth spurt with sales up 60 percent year-over-year since 2011 when we launched. The pandemic actually helped us because it helped differentiate us from the masses and we’ve been able to capture a lot of customers. Not to sound boastful, but a lot of guys are coming to us because there’s nowhere else to go that offers the same assortment of tailored to sportswear to collaborations with Champion and others at both high and low prices.”

Snyder hopes to continue to capitalize on this success with his retail rollout.

“As we expand into key growth markets like Los Angeles, the design of our stores and how they support our sales goals are extremely important,” he said. “A Todd Snyder store will bring consumers into the world of Todd Snyder, showcasing our product but also in-house tailors or made-to-measure services, adding in hospitality aspects or partnering with brands like Moscot to open shops-in-shop within our stores. We are strategic about using our shops as a hub for services that will naturally bring people through the door and then convert them into a Todd Snyder customer.”

Despite the focus on retail, Snyder said 90 percent of the company’s sales continue to come from online, a figure he hopes will drop to 80 percent once the stores in major markets open this year and next. “That’s my goal,” he said, “to have retail represent 20 percent of our sales.”

When Snyder launched his brand 11 years ago, he followed a more traditional path of selling through wholesale channels. But that has changed and he no longer sells outside his own stores and e-commerce site.

It doesn’t hurt that his brand is owned by a major U.S. retailer, American Eagle Outfitters, which purchased Todd Snyder for $11 million in 2015. The first store opened in Madison Park the next year.