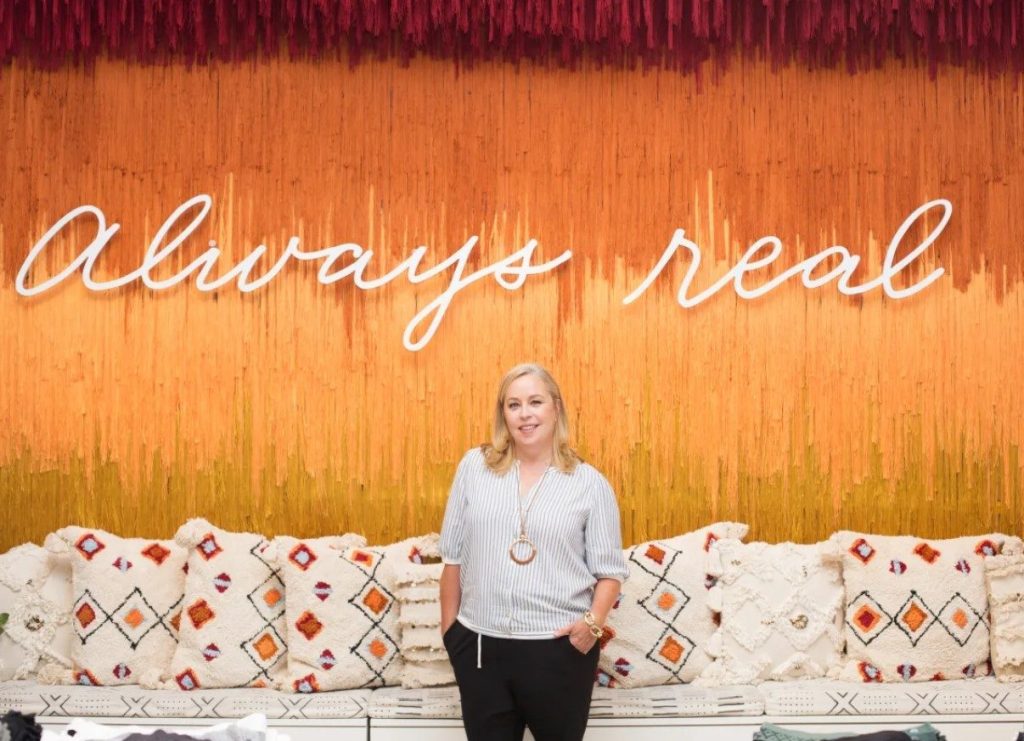 The executive has grown Aerie into a $1.4 billion brand and launched several offshoot concepts, including Offline and Unsubscribed.

Jennifer Foyle joined American Eagle Outfitters in 2010 and has been the catalyst behind the growth of the company’s Aerie brand, growing sales from $224 million in 2014 to $1.4 billion today. Now president and executive creative director of both Aerie and American Eagle, Foyle has also created two new concepts for the company: Offline by Aerie, a business centered around leggings, and Unsubscribed, a higher-end, socially conscious store. Here, Foyle offers insight on her management style and the road to success.

WWD: In 2014, you launched Aerie Real, a campaign where you didn’t airbrush the models. Why did you decide to do that before it became commonplace?

Jennifer Foyle: Aerie is a subbrand of American Eagle Outfitters, which has millions of customers and an incredible brand platform, and we [were] just trying to break in. We knew this intimate apparel sector was dominated by a few leaders, so we had to do something different. We had a simulated store set and my creative director said none of the pictures were airbrushed. And I said, “Why would you airbrush a model?” And that was the impetus for Aerie Real. It was that small, but it turned into something so much bigger. And if you think about where we are today, we were at the forefront of body positivity in a super sexed, supermodel environment. We just knew that this would be a winning solution to welcome women into our brand of all shapes, sizes and diversity and now we have this incredible platform. It takes a village and some time but we’re now a $1.4 billion brand and I’m really proud of what the team is doing.

WWD: That started a cultural movement, but you’ve also had a lot of financial success. Do you have a time frame in mind for when you’ll hit $2 billion?

J.F.: Yes, 2025, but these times are unprecedented. So we’re just going to keep forging ahead. We have lots of great ideas. This is a company where we listen to the smallest voice and act on it. And we do make a lot of mistakes. But when I think about the future, we have Aerie, we have Offline that we just launched — the leggings are a viral success — and Aerie is simply underpenetrated and so is Offline. We’re opening Offline stores as we speak so plenty of room for growth there. If you look at North America, we’re not even in Canada yet, so there’s international expansion in the near term, and then long term, our biggest challenge is penetrating new markets and how we get this passion that we have from the inside to permeate those walls and touch new markets. That takes a lot of work and a lot of love and a lot of realness and a lot of authenticity.

WWD: When we think about American Eagle, you always seem to be ahead of the curve. How do stay on top of rapidly shifting consumer preferences?

J.F.: These times are really challenging, but we have a leader, Jay Schottenstein, who owns many companies — he’s a complete entrepreneur and we have a lot of freedom to try new things. If it wasn’t for Jay, I don’t think Aerie would be where it is today. We had a lot of tests and failures and he allowed for that, and he knew that there was something there, particularly when we hit on Aerie Real. But we have to stay ahead and we have to think differently. I’m in the office every day and I think that’s what’s going to keep us moving along. I’m seeing ideas and walking the halls, and I think that that’s how we’re going to keep in the forefront — being face to face. It’s as simple as that.

WWD: You’re one of the few female leaders in retail. Do you feel like you’re breaking a glass ceiling or paving a way from future female leaders?

J.F.: I actually think Aerie has broken glass ceilings. It was so special what we did back in 2014. We were trailblazers and did something very different. In the past 30 years, I was at the department store with Marvin Traub, I worked for Mickey Drexler for 10 years at the Gap and then J. Crew when we went public, and then, here comes this Aerie opportunity and I just realized that nobody was doing intimates in a new and modern way. But it’s mostly just about the brand and the team. And I roll up my sleeves, and I get in there. Maybe that’s what I leave behind but it’s not about me, it’s really just about this incredible team.

WWD: How do you manage so many different brands, especially during a pandemic when we’re not in the office?

J.F.: We launched two brands during the pandemic. I woke up one morning and I had this idea of Unsubscribed — how do you unsubscribe from life? How do you check out once in a while? And I really believe that with all this fast-fashion and all this competition, we birthed the concept of Unsubscribed. It’s all about slow retail, conscious retail, and there’s one boutique on Madison Avenue. But Offline is the biggie. We had a leggings business that was off the charts in Aerie, so I said let’s create a brand. And I came up with the name Offline and I trademarked it. My legal team thinks I’m crazy, but the minute you trademark something, you own it. And AE, I took over during the pandemic and I saw there were some simple, low-hanging fruit that we could grab. We dominate in denim but we walked away from other businesses, so lots of opportunity there. And I have a new idea that we’re going to launch in the spring, another new subbrand for American Eagle, because I think it just says life — it gives you something to talk about.

WWD: The American Eagle brand is the namesake, so what’s next for that?

And that takes time to get that right. Over the past two years, we got rid of 45,000 wasted skus that did sub-$10 million. That’s a lot of work for not a lot of return when [you] think about a [more than] $3 billion brand. So how do we move ahead? We’ve got the heritage, we’ve got a new store design that we’re about to launch next year. And innovation. Jeans are the forefront of everything we do. We just launched a stretch jean [that] looks authentic on the front end but the back panel is stretch. So you get the look of your favorite jean in your closet but the back panel is comfy and stretchy. We’re never going to walk away from our jean and innovation because that’s at the core of everything we do.

J.F.: That’s a small incubation lab. It was concepted before I arrived. We’ve been rationalizing and making sure we’re focused on the big wins, but I love this little brand. It was a SoHo pop-up, it’s higher-end, it works great internationally — we just opened up a couple of stores in Japan. We’re rebirthing it at the moment and I look forward to relaunching that in a smaller way. It’s definitely something that we’re learning from. I hope that we can break into a little bit of an older market so our teen customer can stay with us because they belong in our denim until they’re 60.

WWD: Where do you see the company going internationally in the future?

J.F.: We just reorganized the international team to simplify it. It was a little bit scattered. We have lots of opportunity in North America — Canada alone is way underpenetrated. We’re doing great in Mexico, but we still have a lot of opportunity there. So we’re going to concentrate on North America. But certainly we see expansion across all countries. We have a solely owned business we just opened in Japan [and] we’re opening up in Amsterdam with great franchise partners. So lots of opportunity there for American Eagle, Aerie and Offline. Aerie is barely scratching the surface internationally. So we’ll get at that once we get the domestic market sorted out.

WWD: Going forward, where do you see the retail world going?

J.F.: I’m a big fan of the dichotomy of digital and real-time customer experiences. All of our brands are fit-intensive — denim, bras, leggings — people want to understand what they feel like on their bodies and you can get that in a store. I love a billboard as much as I love a digital ad. I think it’s important to not just be focused on digital. I’m in apparel and this is about customers trying your clothes and loving them. It’s about the experience, it’s about the customer and the product and if you think about that and how you can entertain customers in new ways, you can win out there, and that’s what we’re hoping to do.

WWD: What’s your outlook for holiday?

J.F.: I’m glass half full. I’m a merchant, so it’s my job to be. We have to be prudent. The whole retail sector had inventory issues back in [the first and second quarters] and I think our team did a nice job of cleaning up, getting ready for the holiday with the focus on the best of the best items. These are hard times and our competition is so promotional so how do you win? It all goes back to being creative and showing up differently. With Aerie, I hated those red clearance signs so I had them do a white-out sale and spray paint the windows white. That brings customers in. So we have conservative plans that we can beat.