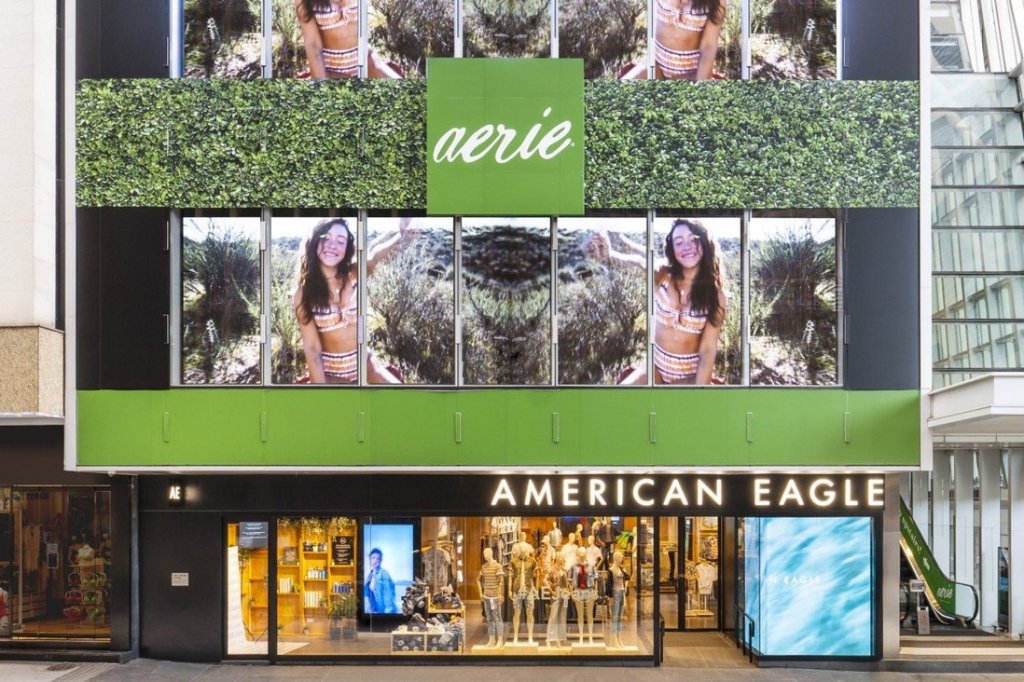 American Eagle, the denim and casual wear brand whose clothes have become a staple in the wardrobes of teenagers and millennials around the world, has been operating in Hong Kong for a decade.

The US outfitter counts 10 stores and one outlet store in the city, but it was only in June of this year that it was able to open a flagship store that truly reflects its thriving business in Hong Kong.

In the prime retail district of Central on Hong Kong Island, the 17,000 sq ft (1,580 square metre), three-storey shop – which previously housed the flagship store of US retailer Gap – has one floor devoted to American Eagle’s sister brand Aerie – a runaway success thanks to its affordable, comfortable and inclusive women’s apparel.

That it took American Eagle 10 years to open a flagship in Hong Kong reflects the vagaries of the city’s commercial real estate market, which until recently was the most expensive in the world.

The interior of the American Eagle store in Central.

The coronavirus pandemic and the months of social unrest which preceded it have changed Hong Kong’s retail scene significantly, allowing brands such as Decathlon, Brandy Melville and now American Eagle to explore previously untapped locations that used to be prohibitively expensive or the sole purview of luxury brands.

“It’s been hard to get the real estate we wanted because it’s been so expensive for so many years,” says Andrew McLean, chief commercial officer at ‎American Eagle. “But, as we’ve built our brand, there’s been a virtuous circle and the landlords have seen that we wanted to invest in the community and build a relationship. So, when Gap came out of the market in Central, we took the opportunity to move there.”

McLean adds that as a result of the coronavirus pandemic, Hong Kong customers have also embraced online shopping, an area on which American Eagle is focusing to provide a complete “omnichannel experience”, as McLean puts it.

“When you start to describe your assortment as cosy and comfortable, which is what customers began to invest in over the last 15 months, convenience became the next part of the equation, so customers began to lean towards online shopping,” he says.

The opening of the Central flagship store, however, speaks to the company’s commitment to bricks-and-mortar retail at a time when many brands, especially in advanced markets such as the United States, are shifting their focus to online channels.

“If you give customers a very flat, two-dimensional store experience, they’re going to migrate online but if you give them engaging service models and the ability to try and feel the products, you’re giving them more options and encouraging a different shopping pattern,” says McLean.

“In the past, you either were an online shopper or a bricks-and-mortar shopper but now it’s just one omnichannel experience. Winning in retail is putting the customer first and giving them the best experience. I don’t think Hong Kong is any different than any other leading city in the world in terms of how the customer interacts with the brand.”

The US is American Eagle’s main market but the company has a global network spanning South America, the Middle East and Asia, where it has physical stores in Hong Kong, Thailand, the Philippines and India. In China, the brand only operates on Tmall, the marketplace owned by retail giant Alibaba, which is the owner of the South China Morning Post.

“For now, we’re focusing online in China but my hope is that within the next two to three years we will open bricks-and-mortar stores,” says McLean. “I don’t want to get it wrong and China is only going to get stronger. ‘Measure twice, cut once’ is how we’re approaching China.”

McLean believes that the Hong Kong flagship store will open the doors to neighbouring markets, and reveals that he’s already been approached by potential partners in Singapore after they saw the buzz created by the opening.

As a brand known for its denim, American Eagle has had to deal with the shift to more comfortable and looser styles that Gen Z and millennials have gravitated towards during the pandemic, something that is here to stay if the constant growth of  loungewear and performance wear is any indication.

McLean believes that the Hong Kong flagship store will open the doors to neighbouring markets.

“The big thing going on, also in Hong Kong, is a move from a tight leg to a loose leg,” says McLean. “The customer has been embracing flare and ‘mom’ jeans. That was happening before the pandemic and coming out of it, even more. I don’t think it’s thanks to increasing waistlines, but just that customers have leaned into comfort and fashion and are replacing their wardrobes.”

It’s hard not to ask McLean about the supposed demise of skinny jeans that became a topic of contention on TikTok earlier this year after Gen Z users began posting videos attacking skinny jeans as an outdated remnant of millennial fashion.

“The truth of the matter is that we still sell a tonne of skinny jeans,” says McLean. “There’s still a customer who wears jeggings and wears them like leggings. Our jeans are stretchy and very comfortable and fit with different lifestyles, and are an elevated product for their price point.”

Aerie is the antithesis of the sexy image championed by brands such as Victoria’s Secret.

Speaking of Gen Z, Aerie has been a success story among younger female consumers, also in Hong Kong, where after just a few weeks the response has been very positive, according to McLean.

“It’s a movement – absolutely incredible, completely home-grown – about body positivity and being beautiful inside and out, letting the real you shine,” says McLean. “It’s all about you feeling good about the clothes you’re wearing. We haven’t retouched models since 2014 and the marketing is fantastic, an expression of sheer joy, and the enthusiasm comes through from everyone who works for the brand, from the designers to the store team.”

Aerie’s image is the antithesis of the sexy look championed by brands such as Victoria’s Secret, which in recent months has gone through its own revamp to align with young consumers’ changing demands about brands and what they stand for.

American Eagle has had to deal with the shift to more comfortable and looser styles that Gen Z and millennials have gravitated towards during the pandemic.

This is an especially fraught issue these days – even more so for companies that have to contend with different demographics and cultures, and need to be mindful when espousing causes that can be sensitive in countries like China, for instance.

McLean says: “You have to believe in your brand first and foremost. You put the customer first, wrap the brand around the consumer and that’s the conversation you’re having with them and leave the politics aside.

“What made American Eagle so successful and will make Aerie successful in Hong Kong is that we have a whole team of people there running the brand and there’s an authenticity that the customer picks up on.”

Rather than politics, the brand prefers to support causes that everyone can lean into, such as sustainability, by reducing the amount of water wasted in the making of denim.